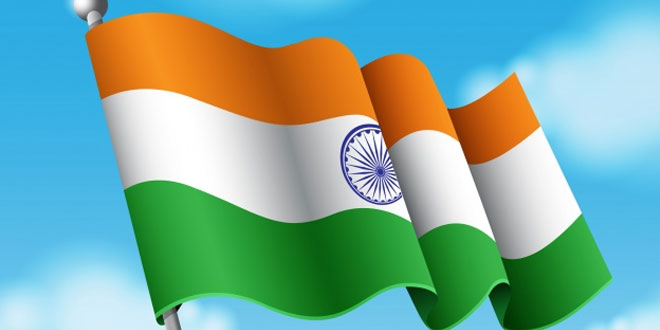 English essay on Our National Flag for Children and Students

Every country has a national flag of its own. It is the symbol of the freedom and identity of that country. India has a tricoloured national flag too. We feel very proud when we see it flying on top of a building of flag post.

Our flag has a long and interesting history. Our leaders fought under it to free our country from the British rule. When our leaders designed our flag, they first put the spinning wheel in the center. It was the symbol of Gandhi Ji’s ‘Swadeshi’ movement. After independence, it was replaced by Ashok Chakra.

The national flag of India consists of three horizontal bands. They are of different colors. That is why the Indian flag is called the tri-colour. It is rectangular in shape. The saffron colored band on top stands for the spirit of sacrifice. The center white band represents truth and peace. The dark green colour at the bottom is for growth.

The Ashoka Chakra in the center of the White band has 24 spokes. Like king Ashoka, It stands for spreading the message of peace and love to everyone. It is dark blue in colour.

We must treat our national flag with respect. No other flag should be placed above or to the right of the national flag. On national festivals, we fly it on all the important buildings and offices. On sad occasions it is flown at half-mast.

Our national flag is our pride. It shows the greatness of India. It also tells us to maintain the unity of country. May our flag fly high for ever.