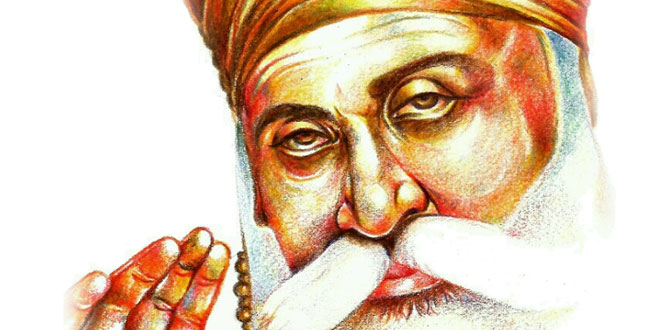 Guru Nanak Dev was a great saint of India. He was born in 1469 at Talwandi, which is now in Pakistan. Guru Nanak‘s father was the village headman. His mother was very religious.

Guru Nanak was a brilliant child. He learnt languages like Sanskrit, Arbi and Farsi very quickly. He understood everything immediately, and had a sharp grasp of things.

However, Guru Nanak liked to be alone even as a child. He had no interest either in his house or in his father’s work. Therefore his father sent him to take the animals for grazing. He became a herds man.

Guru Nanak liked the company of Sadhus and saints very much. He was married at the age of 29. His wife bore him two sons, Shri Chand and Lakshmi Das.

Guru Nanak was very sad at the evils that had crept into Hinduism. So he started the Sikh religion. He was against idol worship and the mere chanting of mantras. He created the holy book of the Sikhs, ‘Guru Granth Sahib’. It has the teachings of Mira, Raidas, Tulsi, Kabir etc. in it.

Sikh religion considers everyone as equals and has no caste system. Today it has a following of millions. The Sikhs are a very fierce and proud race. Guru Ji died at the age of 70 in the year 1539.