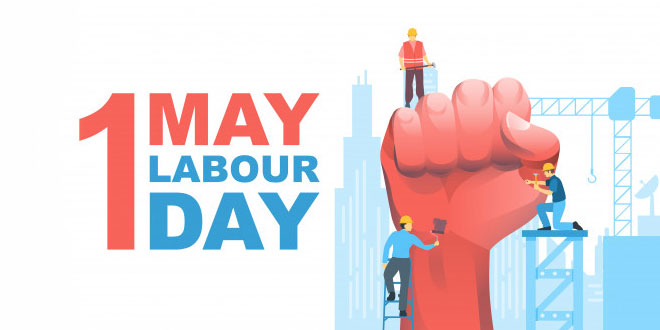 Labour Day Speech: Thank you for being a part of this forum. Today we will discuss about the Labour Day, which is also called as May Day. It is celebrated worldwide on May 1st every year. Our organisation is a Private Welfare Organisation that works in association with the State Government; we basically work for the development of the workers that belong to the low strata. Some of the very renowned Industrialists are also present amongst us today who support this movement. Friends, whenever we hear the term labour, we imagine tough or hard work or physical labour. We have gathered here to focus on some important rights of the labour who work for the big and prominent organisations.

Even though historically Labour Day originated in the US in order to get a bill passed that advocated 8 hours of work for the labours which got accepted and since 1886 onwards, celebration of Labour Day started in order to honour the hard work of the labours or employees.

The fact is that no company can flourish or even sustain without labour. But when we say, we also mean any or every employee working for the company. Companies should also ensure other than following the 8 hours of work that labours or employees are not discriminated on the basis of race, caste, creed, gender, disability, etc and they should be paid competitive wages or salary. In addition to this, each labour is an individual first and thus should be valued irrespective of their position or job responsibilities.

It is also true that the labours are the driving force of our Indian economy and industrial progress. Labours have a great political influence too as certain Labour issues have helped several political parties win elections. Labours help run factories, build roads, buildings, etc drill for oil, and many more.

Today’s labours are is no longer ignorant or uneducated people who don’t know their rights or who can be suppressed easily. But there are some big companies which import labours from remote areas or villages. These people are naïve and since they are poor, they agree to work on any term and conditions. The members of our organisation travel in those areas and listen to the issues faced by them and highlight the same to the state government and work towards their betterment. We have also opened schools in many villages and impart education to children and grown up people.

Our organisation also works against child labour. We have identified several mines and factories that employ children in their production unit. The issue had been highlighted last year by one of the NGOs and we immediately took up the issue and liberated all those children from such units. We are also providing education to them now and art and craft training to their respective parents so that they can earn their livelihood.

I would appeal to all the industrialists, government, both private and government firms, including the common people that we should join hands in eradicating evil from our society and support the low strata people so that they can also earn a respectable life.