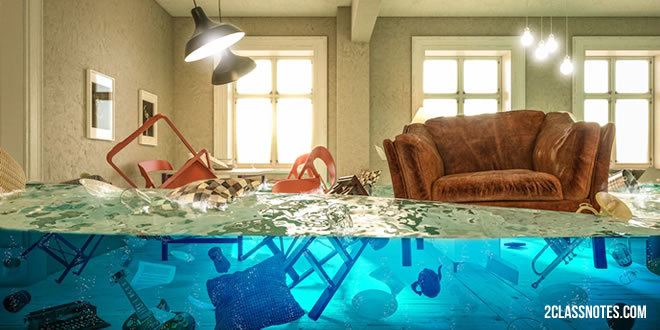 Long And Short Paragraph On Flood In English

You will find here below a number of paragraphs on Flood of varying word lengths. We hope these paragraphs on Flood will help students in completing their school assignments. These will also help children write and read out paragraphs in simple words and with small sentences. Students can select any Flood paragraph according to their particular requirement.

Land may itself also get flooded if there is very heavy rainfall. Continuous rain on an otherwise dry land can inundate the land. Floods also get caused in cities where the drainage system is poor. When there are heavy rains such cities get flooded.

Floods occur when water bodies receive excessive water due to continued torrential rains. Normally dry lands may also get flooded when water overflows the banks of water bodies, or when there is heavy and continuous rainfall. Floods also occur in modern cities and towns where there is a high density of human population, and increased urban development by way of housing and other construction.

In such areas trees are also felled for construction activity. Poor drainage systems in modern cities also lead to flooding when there are continuous or heavy rains. Felling of trees leads to increased soil erosion, and silting of water bodies that also leads to flooding during heavy rains. Floods cause loss to life and property. Humans , animals and birds are likely to perish in a flood. Areas in coastal regions and near the banks of water bodies are at a higher risk during floods.

Floods occur in water bodies and also on otherwise dry land when there is an excessive accumulation of water. When water bodies receive excess water that flows beyond their banks there is a flooding of the water body, and of the land which it thereby inundated.

Various activities of men have caused ecological destruction that has also been responsible for the occurrence of floods. For example, when trees are cut and forests are cleared there is increased soil erosion. This is because soil binds the soil, and the cutting of trees results in the top soil getting washed away in rains. Soil erosion leads to silting of rivers and lakes. When there are heavy rains these water bodies get flooded.

Floods are also caused in modern-day urban areas marked by increased use of land for buildings. These concrete jungles are usually made possible by felling trees to make space available for the urban development. Besides, with a high density of population, the drains in these cities get clogged due to large quantities of domestic garbage including plastic that is non-biodegradable. Therefore, when there are heavy and continuous rains there is poor drainage of the rain water that leads to flooding.

Floods are caused in water bodies as also on land. When rains are very heavy or last for many days water bodies may receive more water than they can hold. Water then floods the water body, and also overflows its banks. The flooding of the water body then causes the land beyond the water body, which is otherwise dry, to get flooded.

Floods are, of course, a natural phenomenon. But man-made factors are also responsible for the incidence of floods. For example, when trees are felled, and forests are cleared indiscriminately there is ecological damage. As trees help in holding the soil, when they are cut off the top soil becomes loose and gets easily washed away when there are rains. This leads to silting of water bodies like lakes and rivers, and subsequently to flooding. The towns and cities in the vicinity of the water bodies, that are otherwise dry, also experience floods then.

Floods are also an outcome of poor drainage systems in modern urban areas where there is a high density of human population. The cities’ drains get clogged by the huge amounts of domestic garbage that also includes plastic waste. As plastic is non-biodegradable it remains without getting decomposed. When there are torrential and continuous rains for some days the drains get totally choked leading to floods in the cities.

Floods cause loss to life and property. Villages, towns and cities in coastal regions and near the banks of rivers are more vulnerable to floods.

Floods may be a Consequence of Ecological Destruction

In modern cities floods also occur because of poor drainage systems. The cities’ drains get choked when there are prolonged heavy rains, and the result is that the rain water accumulates without getting drained off. With already clogged drains due to excessive industrial and domestic solid waste and garbage, the drains get totally choked during heavy or continuous rains leading thus to floods.

Excessive felling of trees and indiscriminate deforestation has resulted in environmental degradation and ecological disequilibrium. Trees help in holding the soil together. When they are cut off the top layer of the soil easily gets washed away when there is a rain or flood. This results in the silting of water bodies such as rivers and lakes. Therefore when there are heavy rains there is a flooding of the water bodies.

With global warming leading to climate change there have been changes in weather patterns. For example, there have been sudden floods, known as flash floods, due to torrential and prolonged rains either in area not prone to floods, or in areas during such periods when it is not normal to have rains and floods.

Flood cause Loss to Life and Property

Floods lead to loss of both life and property. Floods may wash away humans as also animals and birds. The homes and property of people may also get washed away in a flood. Fishermen are usually at high risk of being affected by floods, as their lives and livelihoods depend on fishing, and they live near water bodies.

Floods are caused due to the accumulation of huge amounts of water.

The excessive accumulation of water in water bodies may cause the water to cross the banks and overflow. There is a flooding of the water body, and consequently an inundation of the otherwise dry land onto which the water overflows. Such a flood occurs when there is incessant and heavy rainfall. Floods are also witnessed on land, which is dry under normal conditions, when there are continued and torrential rains. Although heavy rains are common during the monsoons they may occur at other times too. With global warming and the consequent climate change, nonseasonal rains and floods are being witnessed at different places. Besides, floods also occur in places that generally do not have them.

Floods are also experienced in urban areas where rain water fails to drain off and cause flooding. A high density of population in these areas along with excessive development of roads and buildings results in poor drainage system, thus causing floods.

Floods also occur due to silting of rivers and lakes. This happens because of soil erosion caused by tree felling and deforestation. Trees are felled in cities and towns inhabited by humans, and in forest areas too with a view to clear land for alternative uses.

Floods cause loss to life and property. Both humans as also animals and birds are vulnerable to get washed away in a flood. Fishermen are likely to get affected by floods, as their life and livelihood depend on fishing. When flood waters enter into homes it makes them unlivable.

Floods are a Disaster and Need to Be Managed

Floods are natural disasters, though the root cause may be man-made. With better weather forecasting systems in place it is possible to predict a flood. This can help in warning people to move away from coasts and river banks or to not venture into the water bodies.

Floods are caused when water bodies overflow their banks or when usually dry land gets inundated by water.

Floods may Occur in Water Bodies and on Land

Floods are caused due to many factors. Water bodies get flooded when the rains are heavy and continuous. The water level then rises beyond safe levels, and water overflows the banks of the water bodies. This may also cause land to get flooded with water.

In modern cities floods occur because of poor drainage systems. A city’s drains get choked when there is a heavy rain. Drains that are already clogged with plastic and garbage get further choked. As a consequence the rain water that accumulates on the roads and streets of the city, without getting drained off, causes a flood.

Floods may be caused due to ecological destruction because of man-made activities such as deforestation. Trees help in binding the soil. When trees are felled the soil becomes loose and gets washed away easily in the rain. This results in silting of water bodies, and consequently in flooding when there are heavy and continuous rains. Floods usually occur in the monsoon season. Floods may also occur in other seasons if there is a cloud burst and heavy downpour of rain. In coastal areas where there are mangrove forests, the clearing of these forests causes the natural protection mechanism against floods to breakdown.

Floods Result in Loss of Life and Property

Flood causes much damage to life and property. Floods may enter homes, and cause destruction of life and property when rivers and lakes get flooded, and enter into towns and cities nearby. Man and other life forms may perish in a flood.

Weather Forecasting May Be Used To Predict a Flood

With technological advancement there are increased weather forecasting facilities. These can be helpful as fishermen as also inhabited areas in coastal regions can be forewarned of impending floods. Evacuation of people living near sea coasts and banks of water bodies is carried out when forecasts reveal an imminent flood. This can help in saving human lives. Weather forecasting also helps in warning tourists not to go to the sea or rivers if a flood is expected. 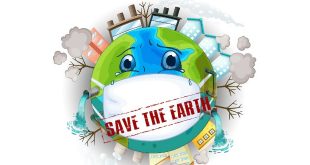 Paragraph On Save Earth