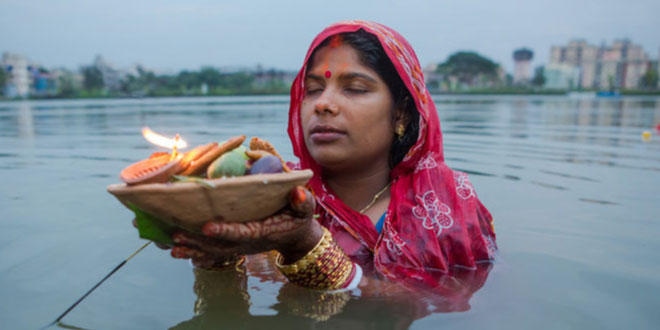 On this day, the god Sun is worshiped for well-being, progress and prosperity of the humanity. The God Sun is also considered as the god of power, energy, and life-force. Chhath Puja is also known as Dala Chhath, Surya Shashti, and Chhathi.

On this festival, people worship the God Sun for purity, thanks for providing source of life, and devotion. People also ask / pray to the god Sun to fulfill their wishes. This festival is celebrated for four days continuously in many parts of India. It has significant important among the people of Bihar state.

During this festival, many ghats (riverbanks) will be full of people to pray and offer special rituals to the Sun god. In single day, two types of puja are performed, one in the early morning and another at the evening. The morning puja / prayer is known as ‘Arghya’ which is for prosperity, good harvest and peace and evening puja / prayer is known as ‘Arghya’ for expression of thanks to the god.

Hindu people believes that the Sun’s energy is magnanimous and therefore, it cures many diseases such as leprosy, and person’s longevity.

Chhath is an ancient Hindu Vedic festival historically native to the Indian subcontinent, more specifically, the Indian states of Bihar, Jharkhand, Odisha, Uttar Pradesh and West Bengal as well as the Madhesh region of Nepal. The Chhath Puja is dedicated to the Sun and his wives Usha and Sangya or Sandhya in order to thank them for bestowing the bounties of life on earth and to request the granting of certain wishes. Chhath does not involve any idol worship. This festival is observed by Nepalese and Indian people, along with their diaspora. While it is a Hindu festival, some Muslims also celebrate Chhath.
Share