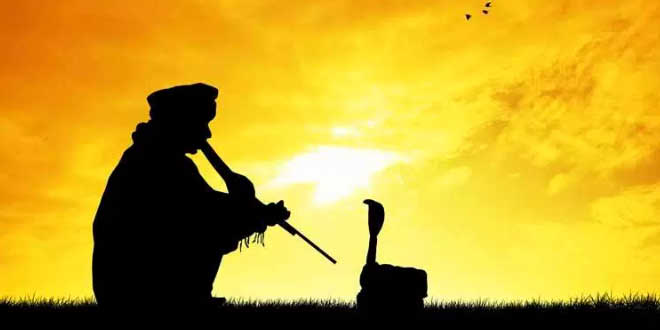 English Essay on Snake Charmer For Students And Children

Snake charmer are commonly seen in big cities. They go from place to place, showing snakes and playing all kinds of tricks.

A snake-charmer carries big and small snakes in a basket. He wear dirty clothes and big ear-rings. He has a pipe on which he plays to make the snakes dance.

Yesterday I saw a snake-charmer’s show near a park. People were standing round him in a circle. The children clapped. At first they showed a cobra. He played on his pipe and the cobra raised its hood. It swayed its hood to the tune of the pipe. Next he showed a pair of small snakes. They crept about quickly. The children were afraid and ran away. Then he showed many other snakes.

The most interesting sight was the fight between a mongoose and a snake. The mongoose ran after the snake to catch and kill it. The people watched the fight with great interest.

After the show was over, he spread a piece of cloth on the ground and asked for money. The spectators gave him a paisa or two each and went away. We enjoyed the show very much.

Snake are dangerous creatures. It is not an easy task to tame snakes. Some of the snakes are very poisonous. This makes the job of a snake charmer very difficult and dangerous.