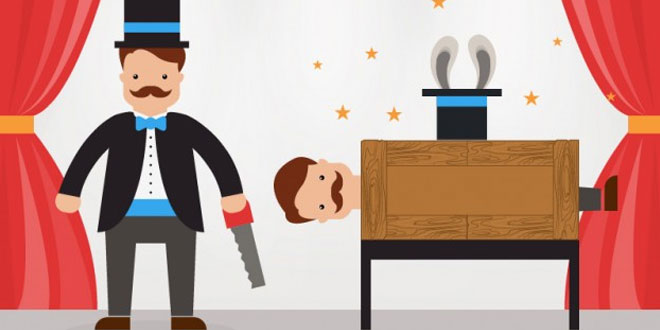 Everyone enjoys magic shows. Children especially never like to miss one. Magicians dress up in colorful clothes for their show. They have other men to help them. Magicians are very good in their work. They spend most of their time practicing. We can never understand how they perform their tricks.

Last Saturday, I had a chance to see a magic show. My father had got tickets for the evening show as a surprise for my birthday. I went with my parents and we took our seats. We waited eagerly for the show to begin. The curtains on the stage lifted and the magician entered. He introduced himself and the show began.

First of all he took four pieces of a rope, ran his hands over them, and when he opened them the rope was one again! He called a boy from the audience and asked for his watch. He covered it with a piece of cloth and broke it with a hammer. But when the boy put his hand in his pockets he found his watch there. We were all surprised.

The magician made his assistant fly in the air, cut him two with a sword, and then joined him again. He made things disappear in the air and brought them out of our pockets. He produced many rabbits and pigeons out of his hat. He made his table rise in the air and stay there for five minutes. He performed many more such surprising tricks.

We could all only watch in wonder. We didn’t realize how 2 hours had passed by. Everyone praised him and admired him. I wish I too could perform such tricks and entertain people with my skill. It would  be nice to be a famous magician when I grow up.