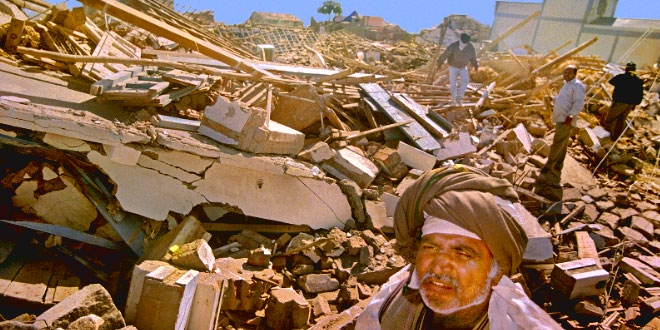 On 26 January, 2001 when everybody in India was celebrating Republic Day at 8.45 a.m. Gujarat was hit by an earthquake. An earthquake which left nothing in Anjaar, Bhuj and Bhachau cities of Gujarat. Within few seconds Gujarat was destructed. Bhuj was 500 years old. The population of Bhuj, Anjaar and Bhachau was 1,60,000, 55,000 and 23,000 respectively.

This major earthquake was measured on 6.9 Richter scale. Its epicenter was found to be 20 km away from Bhuj in North East. The State and Center Government help reached to the victims of Gujarat a little later. This earthquake brought an incalculable loss to the people of Gujarat. The people of Bhuj. Anjaar and Bhachau districts of Gujarat were the worst hit. Gujarat virtually changed into a complete picture of destruction. The military and paramilitary came to the rescue of people caught in isolation. Aids came to Gujarat from every part of world. Even Pakistan was not left behind. Aid was given in king rather than cash. An approximation was made with regard to loss of life and property, Rs. 6,000 crore worth of personal property, Rs. 1000 crore worth of public property was ruined. Nearly 3,000 to 10,000 people died, 35,000 injured and 1,00,000 people became nomads. It will take a lot of time to rebuild Gujarat. It is true that a furious nature is very hard to tame.