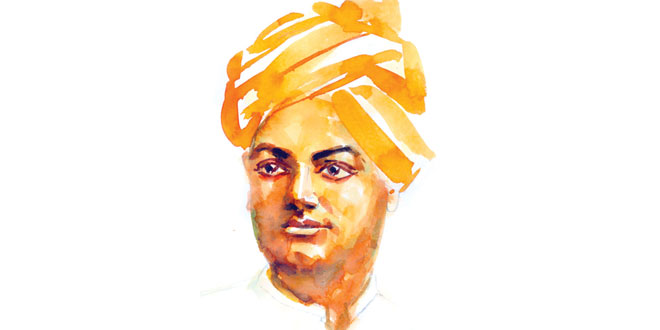 Swami Vivekananda was born as Narendranath Dutt on January 9, 1862 in Calcutta. He was a very intelligent child and was devoted to spirituality from the very beginning. His saintly parents had a lot of influence on him.

Naren had deep spiritual experiences from a early age. He would forget the world while meditating. He was a natural leader his friends. He first meeting was to change his life.

At his first meeting, Naren asked the famous saint if he had seen God. When Shri. Ramakrishna replied “yes”, Naren immediately accept him as his guru. Thus began a long and beautiful relationship between the two.

Narendranath’s love for God grew under his guru’s guidance. Swami Rama Krishna chose Naren as his heir. After his death, Naren came to be called as “Swami Vivekananda”.

Swami Vivekananda travelled all over India spreading his guru’s message of experiencing God oneself to be one with him. He loved his motherland and her people deeply. Wherever he went, he was received with loved and respect.

Vivekananda represented India in the Parliament of Religious in 1893 in Chicago. With his brilliant speech, he won himself many admirers. Back in India, he established the Ramakrishna Mission Association, which carries forward his work even today. This great saint of India passed away on July 4, 1902, Leaving behind a great void.