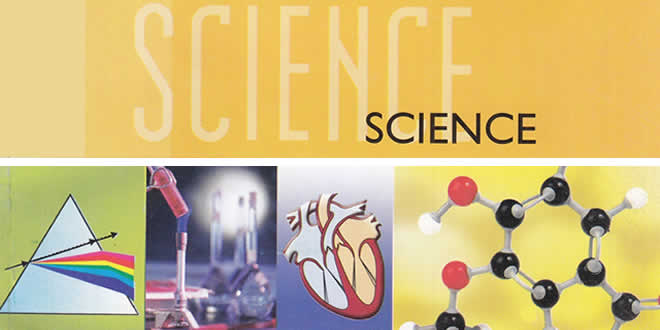 Question 1: The muscular diaphragm that controls the size of the pupil is

Question 2: Having two eyes facilitates in

A : Increasing the field of view
B : Bringing three-dimensional view
C : Developing the concept of distance / size

Then the correct option is / are

Question 3: The black opening between the aqueous humour and the lens is called

Answer: d
Explanation: (d) The black opening between the aqueous humour and the eye lens is called pupil.

Question 4: Near and far points of a young person normal eye respectively are

Question 5: The defect of vision in which the person is able to see distant object distinctly but cannot see nearby objects clearly is called

Question 6: The ability of eye lens to adjust its focal length to form a sharp image of the object at varying distances on the retina is called

Answer: c
Explanation: (c) It is called power of accommodation of the eye.

Question 7: Myopia and hypermetropia can be corrected by

Question 9:  The defective eye of a person has near point 0.5 m and point 3 m. The power far corrective lens required for

(i) reading purpose and
(ii) seeing distant objects, respectively are:

Answer: b
Explanation: (b) For reading purpose 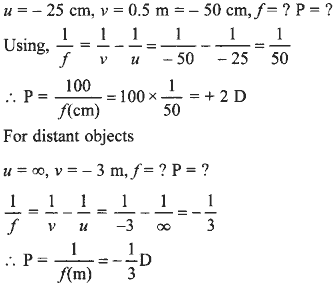 Question 10: The image formed on the retina of the human eye is

Answer: b
Explanation: (b) Eye lens is convex in nature. So, image formed by it on the retina is real and inverted.

Question 11: When white light enters a prism, it gets split into its constituent colors. This is due to

(a) different refractive index for different wavelength of each colour
(b) each colors has same velocity in the prism.
(c) prism material have high density.
(d) Scattering of light

Answer: a
Explanation: (a) Dispersion takes place because refractive index of the material of prism is different for different wavelength.

Question 12: The air layer of atmosphere whose temperature is less then the hot layer behave as optically

Answer: a
Explanation: (a) The cold air layer of the atmosphere acts as a optically denser medium than hot air because the molecules are closely packed together.

Question 13: Refraction of light by the earth’s atmosphere due to variation in air density is called

Question 14: The deflection of light by minute particles and molecules of the atmosphere in all direction is called ________ of light.

Answer: b
Explanation: (b) The said phenomenon is called scattering of light.

Question 15: One cannot see through the fog, because

Answer: d
Explanation: (d) Objects are not visible through the fog because droplets scatter the light rays.

Question 16: A person cannot see distinctly objects kept beyond 2 m. This defect can be corrected by using a lens of power [NCERT Exemplar Problems]

Question 17: A prism ABC (with BC as base) is placed in different orientations. A narrow beam of white light is incident on the prism as shown in figure. In which of the following cases, after dispersion, the third colour from the top corresponds to the colour of the sky? [NCERT Exemplar Problems]

Answer: a
Explanation:(a) At noon, the sun is at top and the light rays coming from the sun have to travel lens distance hence, all colours get scattered very less even blue and violet.

Question 19: Twinkling of stars is due to atmospheric [NCERT Exemplar Problems]

Answer: b
Explanation: (b) Twinkling of star is due to atmospheric refraction of starlight caused by the gradual change in refractive index of different air layers at different height, the apparent position of star keeps on changing.

Answer: c
Explanation: (c) Violet and blue colour have shorter wavelength. So, they scattered more than lights of other colour by the molecules present in the atmosphere.

Question 21: The danger signals installed at the top of tall buildings are red in colour. These can be easily seen from a distance because among all other colors, the red light [NCERT Exemplar Problems]

Answer: b
Explanation:(b) Red colour has longer wavelength so least scattered by smoke or fog.

Question 22: The bluish colour of water in deep sea is due to [NCERT Exemplar Problems]

Question 23: When light rays enter the eye, most of the refraction occurs at the [NCERT Exemplar Problems]

Answer: b
Explanation: (b) Most of the refraction for light rays entering the eye occurs at the outer surface of cornea which acts a primary lens converging in nature.

In the following Questions, the Assertion and Reason have been put forward. Read the statements carefully and choose the correct alternative from the following:

Assertion: Blind spot is a small area of the retina which is insensitive to light where the optic nerve leaves the eye.
Reason: There are no rods or cones present at the junction of optic nerve and retina in the eye.

Assertion: The near-point of a hypermetropic eye is more than 25 cm away.
Reason: Hypermetropia is corrected using spectacles containing concave lenses.

Assertion: Myopia is the defect of vision in which a person cannot see the distant objects clearly.
Reason: This due to eye-ball being too short.

Assertion: Concave mirrors are used as reflectors in torches, vehicle head-lights and in search lights.
Reason: When an object is placed beyond the centre of curvature of a concave mirror, the image formed is real and inverted.

Answer: d
Explanation: (d) The statement of the Assertion is false but the Reason is true.

Assertion: When a pencil is partly immersed in water and held obliquely to the surface, the pencil appears to bend at the water surface.
Reason: The apparent bending of the pencil is due to the refraction of light when it passes from water to air.

Question 31: The least distance of distinct vision for a normal eye is

Question 32: A person cannot see distinctly objects kept beyond 2m. This defect can be corrected by using a lens of power

Question 34: The splitting of white light into different colors on passing through a prism is called

Question 35: At noon, the Sun appears white as

Human Eye and Colorful World MCQs – Question 36: Twinkling of stars is due to

Question 38: When white light enters a glass prism from air, the angle of deviation is maximum for

Question 39: The amount of light entering the eye can be controlled by the

Question 40: What type of image is formed by the eye lens on the retina?

Question 41: The medical condition in which the lens of the eye of a person becomes progressively cloudy resulting in blurred vision is called

Question 42: The defect of the eye in which the eyeball becomes too long is

Question 43: The defect of vision in which the image of nearby objects is formed behind the retina, is

Question 44: Which of the following is a natural phenomenon which is caused by the dispersion of sunlight in the sky?

Objectives Questions On Human Eye And The Colorful World

Question 45: Name the scientist who was the first to use a glass prism to obtain the spectrum of sunlight.

Question 50: When light falls at critical angle on the surface of a rarer medium while coming from a denser medium, the refracting angle is _______ .

Question 52: 28 frames are projected per second in motion picture. [True/False]

Question 53: Myopia is caused due to excessive curvature in cornea. [True/False]

Question 55: Power of accommodation for a normal eye is 4 dioptre. [True/False]

Question 56: The optical nerves carry signals to the brain. [True/False]

(a) a thin membrane which allows light to enter the eye.
(b) the muscles which help in changing the focal length of eye lens.

Question 59: Name the part of our eyes that helps us to focus near and distant objects in quick succession.

Question 60: In which direction, the near point of hypermetropic eye is shifted from the normal near point?

Answer: c
Explanation:The near point of hypermetropic eye is shifted farther away from the normal near point.

Question 63: What is the nature of eye lens of human eye and that of the image formed at the retina of the eye by it?

Answer: c
Explanation: The nature of eye lens in human eye is convex nature of the image formed on the retina by it is real, inverted and diminished.

Question 64: Mention the role of optic nerve in the human eye.

Answer: c
Explanation:Role of optic nerve in human eye: It transmits the visual information in the form of electrical signal generated at retina to the brain.

Human Eye and Colorful World MCQs – Question 65: What is the other name of old hypermetropia?