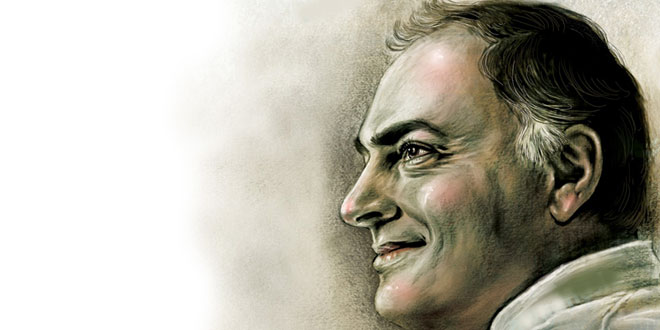 Rajiv Gandhi was born on August 20, 1944 in Bombay. He was the first son of Indira and Feroze Gandhi. Because his Grandfather Shri Jawaharlal Nehru and other family members were Involved in the freedom struggle, Rajiv was shuttled between Lucknow, Allahabad and Delhi. He even lived with Gandhiji in Sabarmati for a while.

Rajive Gandhi did his schooling at Doon School, Dehradoon, and went to England for higher studies. During this time, he met Sonia Maino, an Italian, whom he married in 1968. He was very interested in flying and become a pilot with the Indian Airlines in 1970.

Sanjay, Rajiv’s younger brother, died in air crash in 1980. Rajiv joined politics to help his mother, the then Prime Minister of India. He joined the Congress Party and become an M.P. in 1981. After that there was no looking back.

When Indira Gandhi was appointed as the sixth Prime Minister of India. He was a very mature and dynamic leader. He made peace with the Punjab and Assam extremists. It was a great achievement.

In 1989, he lost the general elections. The security cover given to him was removed, though he was under threat from Punjab and LTTE militants. In a great tragedy, Rajiv Gandhi was Killed by LTTE militants on May 20, 1991 at Sriperumbudur. India lost a great leader and a patriotic son of hers.