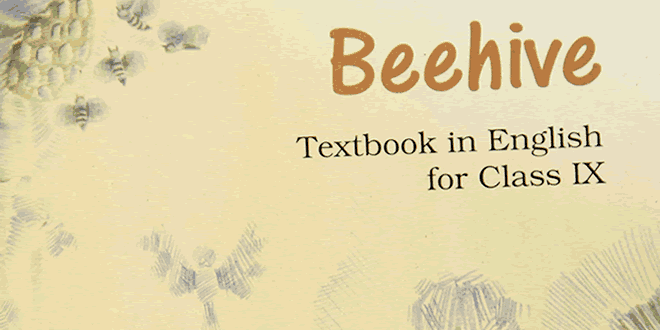 Question – The Bond of Love: Given in the box are some headings. Find the relevant paragraphs in the text to match the headings.

An Orphaned Cub; Bruno’s Food-chart; An Accidental Case of Poisoning; Playful Baba; Pain of Separation; Joy of Reunion; A Request to the Zoo; An Island in the courtyard

An Accidental Case of Poisoning – para 8

An Island in the Courtyard – para 21

Question – The Bond of Love: Answer the following questions.

3. “We all missed him greatly: but in a sense we were relieved.”

Question: Answer the following questions in 30 to 40 words each.

Question – The Bond of Love:
1. Find these words in the lesson. They all have ie or ei in them.

2. Now here are some more words. Complete them with ei or ie. Consult a dictionary if necessary.

(There is a popular rule of spelling: ‘i’ before ‘e’ except after ‘c’. Check if this rule is true by looking at the words above.)

Question: Here are some words with silent letters. Learn their spelling. Your teacher will dictate these words to you. Write them down and underline the silent letters.

Question: How to look at an Index

An index is a list of names or topics that are to be found in a book. It is a list arranged in alphabetical order at the end of a book.

The following paragraph shows that the doctor is consulting the index of a medical book to find out which injection is appropriate for Bruno.

“Out came his medical books, and a feverish reference to index began: What poison did you say, sir?” “Barium carbonate”. “Ah yes – B – Ba – Barium Salts – Ah! Barium carbonate! Symptoms – paralysis – treatment – injections of … Just a minute, sir. I’ll bring my syringe and the medicine.” 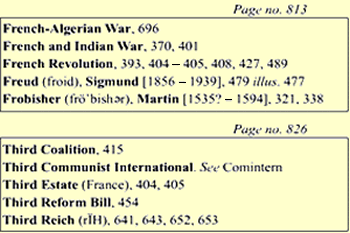 On which pages in this book will you find information about the French Revolution and the Third Estate?

2. To know what ‘Food Security’ and ‘Minimum Support Price’ mean in the context of the economic growth of a country you can go to the subject index given below from Poverty and Famines – An Essay on Entitlement and Deprivation by Amartya Sen. Under which heading in the index are you likely to find these topics?

3. Given below is a portion of an index page from the book, French’s Index of Differential Diagnosis, edited by F. Dudley Hart M.D., F.R.C.P. 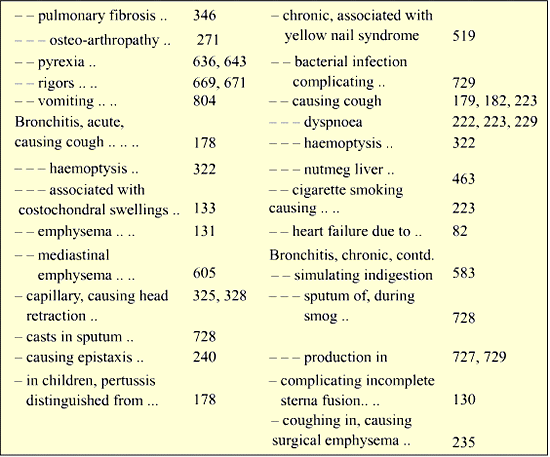 Study the entries and find out whether the following topics are discussed in the book.

2. We will likely find about what ‘Food Security’ and ‘Minimum Support Price’ mean in the context of the economic growth of a country, under the topic “Food availability decline (FAD thesis)”.

3. All the above topics are discussed in the book.

(You can begin: The vet and I made a dash back to the car. Bruno was still floundering …)

(i) A dash back to car. Bruno still floundering about on his stumps, but clearly weakening rapidly; some vomiting, heavy breathing, with heaving flanks and gaping mouth.

Hold him everybody! In goes the hypodermic – Bruno squeals – 10 c.c. of the antidote enters his system without a drop being wasted. Then minutes later: condition unchanged! Another 10 c.c. injected! Ten minutes later: breathing less stertorous – Bruno can move his arms and legs a little although he can not stand yet. Thirty minutes later: Bruno gets up and has a great feed! He looks at us disdainfully, as much as to say, ‘What’s barium carbonate to a big black bear like me?’ Bruno is still eating.

(ii) In the paragraphs above from the story the verbs are in the present tense (eg. hold, goes, etc.). This gives the reader an impression of immediacy. The present tense is often used when we give a commentary on a game (cricket, football, etc.), or tell a story as if it is happening now. It is, therefore, called the narrative present.

You will read more about the present tense in Unit 10

Find the adverbs in the passage below. (You’ve read about adverbs in Unit 1.) We thought that everything was over when suddenly a black sloth bear came out panting in the hot sun. Now I will not shoot a sloth-bear wantonly but, unfortunately for the poor beast, one of my companions did not feel that way about it, and promptly shot the bear on the spot.

(i) Complete the following sentences, using a suitable adverb ending in -ly.

(ii) Choose the most suitable adverbs or adverbial phrases and complete the following sentences.

3. Take down the following scrambled version of a story, that your teacher will dictate to you, with appropriate punctuation marks. Then, read the scrambled story carefully and try to rewrite it rearranging the incidents.

A grasshopper, who was very hungry, saw her and said, “When did you get the corn? I am dying of hunger.” She wanted to dry them. It was a cold winter’s day, and an ant was bringing out some grains of corn from her home. She had gathered the corn in summer.

“I was singing all day,” answered the grasshopper.

“If you sang all summer,” said the ant, “you can dance all winter.”

“What were you doing?” asked the ant again.

The grasshopper replied, “I was too busy.”

“I collected it in summer,” said the ant. “What were you doing in summer? Why did you not store some corn?”

1.(i) The vet and I made a dash back to the car. Bruno was still floundering about on his stumps, but clearly he was weakening rapidly. There was some vomiting and heavy breathing. His flanks were heaving and his mouth was gaping.

Everybody was asked to hold him. The hypodermic medicine went into Bruno, who squealed. 10 c.c. of anecdote entered his system without a drop being wasted. Even ten minutes later, the condition was unchanged. Another 10 c.c. was injected into him. Ten minutes later, his breathing became less stertorous. Bruno could move his arms and legs a little although he could not stand yet. Thirty minutes later, Bruno got up and had a great feed. He looked at us disdainfully, as much as to say, ‘What’s barium carbonate to a big black bear like me?’ Bruno was still eating.

2.We thought that everything was over when suddenlya black sloth bear came outpanting in the hot sun. NowI will not shoot a sloth-bear wantonlybut, unfortunatelyfor the poor beast, one of my companions did not feel that way about it, and promptlyshot the bear on the spot.

3. It was a cold winter’s day, and an ant was bringing out some grains of corn from her home. She had gathered the corn in summer. She wanted to dry them. A grasshopper, who was very hungry, saw her and said, “When did you get the corn? I am dying of hunger.” “I collected it in summer,” said the ant. “What were you doing in summer? Why did you not store some corn?” The grasshopper replied, “I was too busy.” “What were you doing?” asked the ant again. “I was singing all day,” answered the grasshopper. “If you sang all summer,” said the ant, “you can dance all winter.”

Question: Pets have unique care and handling requirements and should only be kept by those with the commitment to understand and meet their needs. Give your argument in support of or against this statement.

There is an on-going debate on whether snake charmers should continue in their profession. You can get some idea about the debate from the newspaper clipping (The Hindu, 16 June 2004) given below. Read it, discuss in pairs or groups, and write either for or against the profession of snake charmers.

By Our Staff Reporter

NEW DELHI, JUNE 15. Over 30 years after the introduction of the Wildlife Protection Act (WPA) that banned the catching of snakes in India, a small community of snake charmers continues to practise the trade catching over 400,000 snakes every year – which ultimately die – in defiance of the law.

A report based on new research by the Wildlife Trust of India (WTI), however, has strongly recommended that the traditional knowledge of the snake charmers and skills be now utilised for education and medicine by setting up sapera centres. This is mainly because the community has virtually no access to land, education or employment opportunities. They are dependent on snake charming to earn a livelihood. They trade around as vendors of traditional medicine, snake catchers and musicians. Ignorance about the law is quite common.

The report entitled ‘Biodiversity, Livelihoods and the Law: The Case of the Jogi-Nath Snake Charmers of India’ based on path-breaking research was formally released by the Inspector General of Forests, V.K. Bahuguna, along with a presentation by members of the sapera community in the Capital on Monday.

“Despite thirty years of the law being in existence, over 70 per cent of the Jogi-Naths are still dependent on snake charming to earn a livelihood. Ignorance about the law was quite common. None of them own land, even though they would like to,” said Bahar Dutt, who led this research. Notably, most of those practising the trade in the current generation are all under 35 years of age.

Trapping occurs throughout the year and during their travels, though this activity increases during the monsoons. According to the data, each family on an average collects at least seven snakes.

Most snakes were force-fed and snake husbandry methods and health were found to be poor. “The snake charmers community council imposes a heavy fine on a person if the snake dies in his custody as it is considered an extremely bad omen. As a result, the snakes are released when the charmers realise that their condition is deteriorating,” said Dutt. Their ambition to showcase the reptiles and earn money was not fulfilled, as they flouted four WPA provisions, for illegally possessing the animals, not feeding them properly, causing injuries by extracting teeth unscientifically and killing snakes for the valuable snake parts and bones. Their offence generally invites imprisonment for three to seven years and a fine up to Rs 25,000 in each case.

“On the positive side researchers found that the snake charmers possess a unique ability to handle venomous snakes with a tremendous knowledge of the different species and their behaviour. They are also called by local farmers to retrieve snakes, who would otherwise just kill them, from agricultural fields or human inhabited areas,” she said.

Question – The Bond of Love: ‘Animals also feel the pleasure of love and the pain of separation’. Make a presentation by giving examples from your own experience.