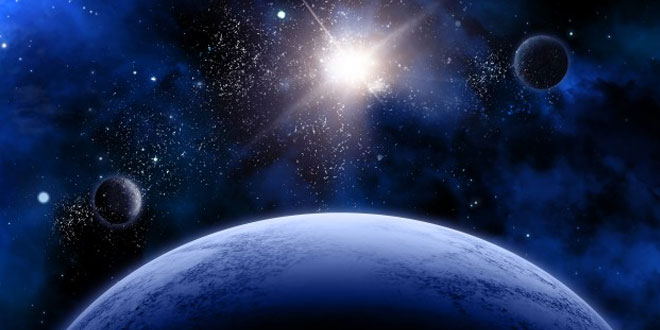 Question: While looking up at the sky, how can you distinguish between a planet and a star?

Answer: While looking up at the sky, we can distinguish between a planet and a star by observing their twinkling nature. Stars twinkle at night sky whereas planets do not.

Question: What is the solar system?

Answer: The Sun, the eight planets, their moons and the other celestial objects that revolve around the Sun form the solar system.

Question: Why do stars give out heat and light?

Ans: Stars are huge spinning balls of hot luminous gases. In the centre of the stars, hydrogen atoms combine to form
helium atoms. During this process, huge amount of energy is released in the form of heat and light.

Question: Which property of the Pole Star makes it very useful for sailors?

Answer: Sailors used the Pole Star to find the north direction because it is the only star that remains stationary in the sky with respect to the earth.

Question: Why was it necessary to define a new unit to measure distances in the universe? What is this unit?

Answer: The distances between heavenly bodies in space are very, very large. Measuring these distances in kilometres would mean dealing with very large numbers. Astronomers, therefore, use special units to measure distances in space. Instead of a kilometre, they use a unit called light year. A light year is the distance that light travels in one year.

Question: Why is Mercury very hot during the day and very cold at night?

Answer: Mercury is very hot during the day (about 400 °C). Its gravitational force is not strong enough to hold an atmosphere. Due to the absence of an atmosphere, the heat is quickly lost at night, and it becomes freezing cold (about – 200 °C).

Question: What is the most distinctive feature of Saturn?

Answer: Three wide rings surround Saturn planet. These rings are not visible with the naked eyes but can be seen only with the help of a telescope. These rings are made of ice and dust. This is the most distinctive feature of Saturn.