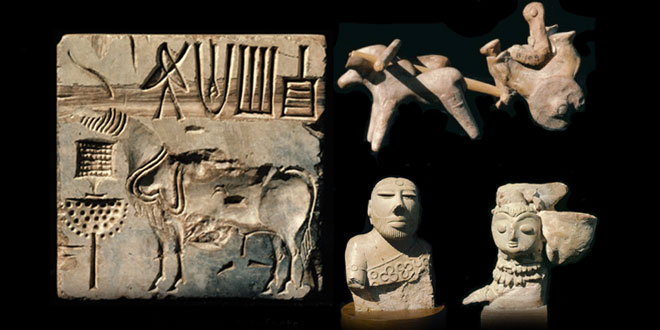 Question: Write a short note on the craft practiced by Harappan.

Question: Where did the Harappan get the raw materials from?

Answer: The Harappans got the raw materials from various places. They got copper probably from present-day Rajasthan, and also from Oman. Tin was brought from Afghanistan and Iran. Gold was brought may be from Karnataka. Precious stones were brought from Gujarat, Iran and Afghanistan.

Question: Write a short note on the city of Lothal.

Answer: Lothal was a city on the banks of a tributary of the Sabarmati. It was an important centre for making stone, shell and metal objects. There was a store house in the city. Fire altars have been found here.

Answer: There were three basic occupations of people living in Harappan cities.

Question: Write a short note on farming methods and rearing done by Harappan farmers and herders.

Question: What could have been the possible reasons behind the end of the Harappan civilization?

Answer: The Harappan civilization suddenly seems to have started to end, around 3900 years ago. People stopped living in many cities. Writing, seals and weights became ‘extinct’. Raw materials were now rarely imported.

Some scholars suggest that this happened due to the drying of rivers. Some others have explained it with deforestation. In some areas there were floods. The floods could have been a reason for the end.

Rulers might also have lost control. Consequently, People abandoned sites in Sindh and Punjab and moved to newer, smaller settlements to the east and the south.