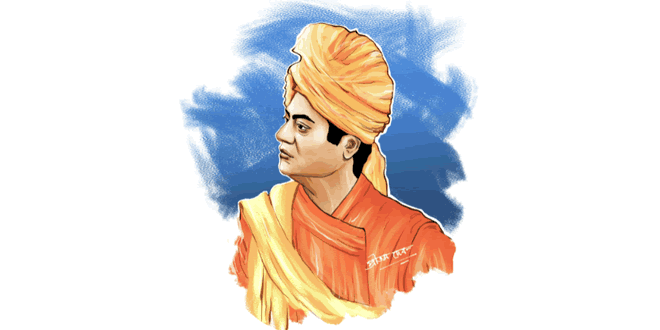 Good Evening Ladies and Gentleman – I warmly welcome you all to the speech ceremony of today!

I, [Rajesh Verma], your host for today would like to deliver a speech on the great spiritual leader of India, i.e. Swami Vivekananda. He is, needless to mention, the world’s famous sage. Born in the city of Calcutta in the year 1863, January 12, Swami Vivekananda in his early years was called as Narendranath Dutta. His father’s name was Viswanath Dutta, who was an educated lawyer in Calcutta’s High Court. Narendranath did not receive education on a regular basis, but rather erratically. However, he began his education with a Primary School with his other friends in the suburban region.

It was out of the fear of bad company of the rough children that Narendranath was not allowed to attend higher secondary school. But he was again sent to the Metropolitan Institution, the foundation of which was laid down by Iswara Chandra Vidyasagar. He had various shades to his personality, i.e. not only was he a fine actor, but a great scholar, wrestler and player. He commanded great knowledge in the Sanskrit Subject. Most importantly, he was a pursuer of truth and never did he tell a lie.

We all know that on our motherland great social reformers as well as freedom fighters took birth. They dedicated their whole lives for the service of mankind and Swami Vivekananda has been one of those true gems which India possessed. He laid down his whole life for the service of the nation and helped people to grow from their miserable existence. Other than doing philanthropic acts, he lived his life reading books from Science, Religion, History Philosophy, Art, Social Science, etc. Also, he greatly admired Hindu Literature like Mahabharata, Ramayana, Bhagavad-Gita, Upanishads and Vedas, which helped in shaping his thinking to a great extent. He received training in Indian classical music. He passed the examination of Fine Arts and received a degree in Bachelor of Arts in the year 1884.

He always quoted Veda and Upanishads and imparted spiritual training to people which prevented India from plunging into a state of crisis or chaos. The crux of this message is “Truth is one: Sages call it by various names”.

The four main points of this axiom are:

The words that he wrote last time to his followers were:

“It may be that I shall find it good to get outside my body, to cast it off like a worn-out garment. But I shall not cease to work. I shall inspire men everywhere until the whole world shall know that it is one with God.”

He lived for a short span of 39 years and amidst all his challenging physical conditions, he left for posterity his four volumes of classics, i.e. Bhakti Yoga, Jnana Yoga, Raja Yoga and Karma Yoga – all these are brilliant treatises on Hindu philosophy. And with this I would like to end my speech.