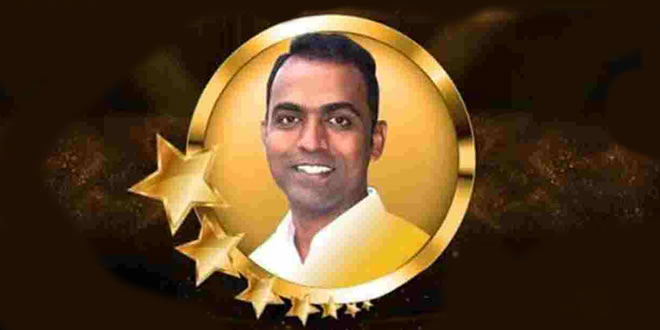 How a teacher from Solapur, Ranjitsinh Disale, won the coveted Global Teacher Prize and $1 million: Here is his story

On 04/12/2020, a 32-year-old teacher named Ranjitsinh Disale was awarded the much anticipated Global Teacher prize and prize money of $1 million for his extensive work in the field of the girl child education and revolutionizing textbooks in India. His massive feat drew praise internationally and exemplified how the resolve of one man, to make an impact, can change lives.

Ranjitsinh Disale hails from Paritewadi village in Solapur district of Maharashtra. He wanted to be an IT engineer and had enrolled in an engineering college. But when things did not work for him, he was persuaded to take up teacher training programme by his father. Although Ranjitsinh Disale was initially hesitant about the decision, his time at the teacher training college made him realize that teachers were the real change-makers in the world.

The story of Ranjitsinh Disale

His first assignment was at the Zilla Parishad Primary School in 2009. The school was located between a storeroom and cattle shed. He observed that most of the female students in the class hailed from tribal communities, where the underage marriage of girl child was prevalent and their education was not taken seriously. To add to the social challenges, Ranjitsinh found that the textbooks were not in Kannada, the mother tongue of the students, and it affected the learning outcome of students.

He then took upon himself to redesign the books from Std 1- 4 such that students can comprehend the subject better. Besides learning Kannada, Ranjitsinh helped re-design textbooks to include QR codes that would contain video lectures, assignments, stories and audio poems for better understanding. The innovation, on his part, helped his students develop problem-solving skills, creativity and better communication.

Ranjitsinh is also a part of ‘Let’s Cross the Borders’ project where he has connected with over 19,000 students from eight countries, including, India, Pakistan, Israel, Palestine, US, North Korea, Iraq and Iran.

The programme is aimed at building peace among students in conflict zones. Ranjitsinh also teaches students in schools from other parts of the world through Microsoft Educator community platform and takes them to virtual trips. He also demonstrates scientific experiments to students from his home laboratory to help them better understand concepts.

As a result of his efforts, the attendance of girl children in his school recorded 100%. Not only that, no teenage/underage marriages were reported in the village as well. Impressed by his innovative endeavors and a successful pilot scheme, the Maharashtra government had announced in 2017 that it would introduce QR-embedded textbooks for all grades in the State. Moreover, the Ministry of Human Resource Development (MHRD) had also announced in 2018 that all NCERT textbooks would include QR codes in the future.

Prior to receiving the Global Teacher’ prize, Ranjitsinh was recognized by Microsoft CEO, Satya Nadella, in his book ‘Hit Refresh.’ He was named 2016 Innovative Researcher of the Year by the Union government and was also awarded the National Innovation Foundation’s Innovator of the Year prize in 2018. He was among one of the top finalists, selected from over 12,000 nominations from over 140 countries. The Global Teacher Prize, established in 2014 by Varkey Foundation, will provide the prize money in equal installments over a 10-year-period, besides financial counselling.

“The COVID-19 pandemic has exposed education and the communities it serves in a multitude of ways. But in this hard time, teachers are giving their best to make sure every student has access to their birthright of a good education. Teachers are the real change-makers who are changing the lives of their students with a mixture of chalk and challenges. They always believe in giving and sharing. And, therefore, I am very pleased to announce that I will share 50 per cent of the prize money equally among my fellow top 10 finalists to support their incredible work. I believe, together, we can change this world because sharing is growing,” he said.

He further added, “By sharing the prize money, you teach the world the importance of giving…I now encourage you to use this platform to give all teachers a voice. There is not a moment to lose as it will fall on young people to find solutions to problems that their parents and grandparents have lacked the will to solve, including climate change, conflict and global pandemics.”