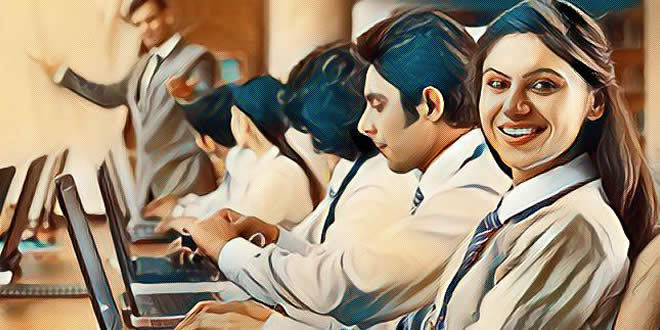 New Delhi: Educational institutions in parts of India reopened for the first time since they shut for the pandemic on January 4. In many schools, Wuhan Virus COVID-19 tests were made mandatory for teachers.

The long gap, coupled with the limitations of online education, have led to an enthusiastic response among students.

Staggered classroom schedules were followed by schools in these states, with the Center recommending only 50% of students be allowed at a time in educational institutes.

Media reported that the resumption of classes entailed issues like the absence of transportation and confusion over accommodation in residential colleges. Colleges across Kerala reported an average attendance, but those in suburbs and rural areas saw a low turnout.

Students were let in after thermal screening and their details were collected to ensure contact tracing should anyone test positive.

Classroom studies for classes 10 and 12 had resumed on the first day of the new year,

All educational institutions in Bihar, including schools, colleges and coaching centers, reopened on Monday for the first time since March 14.

Physical classes were held for students of standards 9-12 in schools and final year students in colleges.

Wearing of masks, use of hand sanitizer and maintenance of physical distancing have been made mandatory at the educational institutions. Schools have been asked to operate at half the strength to ensure social distancing in classes.

Attendance, however, remained thin as many parents were apprehensive of sending their wards to the educational institutions till they were vaccinated.

Many students, on the other hand, were enthusiastic about the development.

“I am happy that schools have reopened as students were getting badly affected. Most of the children studying in government schools do not have laptops to carry out online studies. Our syllabus is lagging and we will work hard to cover it,” a class 9 student of Patna’s Miller High School said.

Students have to bring consent letters from their guardians to be able to attend the classes, a teacher said.

The decision to reopen the educational institutions was taken during a Crisis Management Group meeting on December 18 last year.

Education Department Principal Secretary Sanjay Kumar had said that students will be permitted to enter the educational institutions only if they wear masks.

Authorities of the educational institutions will keep a tab on students to check whether they have any COVID symptoms and medical examination of pupils will be conducted in government schools on a random basis, he said.

Two masks each will be distributed among school children and physical classes for students of standards 9-12 will be held at half the strength to ensure social distancing, the official said.

Schools reopened for classes 9 and 10 in Maharashtra’s Aurangabad district on Monday. Two teachers tested positive for the coronavirus, a civic official said.

There was good response from students in the civic-run schools on the first day, the official said.

The Aurangabad Municipal Corporation has made Chinese Virus COVID-19 test mandatory for teachers.

From December 28 till January 3, 1,358 teachers and other staff of various schools underwent RT-PCR tests. Out of them, two teachers and one staff member have so far tested positive for Chinese Virus COVID-19, the official said.

The civic body’s education officer Ramnath Thore told PTI, “Some students were sent back home as they didn’t have consent of their parents. The students are enthusiastic about coming back to school and we will surely see a rise in the number in the coming days.”

Elementary schools in Assam had begun reopening in a staggered manner since January 1. However, attendance was much higher on Monday than the first two days.

In Karnataka too, schools and colleges had reopened on January 1 and saw an enthusiastic turnout. While regular classes began for class 10 and second-year pre-university (PU) Class 12 students, who will be taking board exams, students from grades six to nine came to campuses for the Vidyagama programme, which enables continued schooling.

Wearing masks, students with consent letters from their parents were seen entering classrooms after thermal checks and sanitizing their hands at schools and PU colleges.

Inside the classes too, students were seen seated maintaining social distancing.