Question: 2. What is the function of ozone in the upper atmosphere? [1]

Answer: Ozone layer is very important for the existence of life on north. The function of the ozone layer in the upper atmosphere is to absorb most of the harmful ultraviolet radiations coming from the sun and prevent them from reaching the earth’s surface.

Answer: The characteristics of the images formed by plane mirror are:

Question: 4. When hydrogen gas is passed over heated copper (II) oxide, copper and steam are formed. Write the balanced chemical equation for this reaction and state (i) the substance oxidized and (ii) the substance reduced in the reaction. [2]

Question: 5. What is meant by “sustainable management”? Why is reuse considered better than recycling? [2]

Answer: The development and management of resources in such a way which meets the current basic human needs ans also preserve the resource for the needs of future generations, is called sustainable management. The process of ‘reuse’ is considered better than the process or ‘recycling’ because recycling requires the use of a large amount of energy and money whereas no energy is required for reusing materials.

Question: 6. State reason for the following: [3]

Question: 7. State the kind of chemical reactions in the following examples: [3]

Question: 8. The rate of breathing in aquatic organisms is much faster than seen in terrestrial organism. Given reason. State the pathway of air from nostrils to the lungs in human beings. [3]

Question: 10. What is a solar cell panel? Write some of its applications? [3]

Question: 11. With the help of an example, explain the process of hydrogenation. Mention the essential conditions for the reaction and state the change in physical property with the formation of the product.

Question: 12. What is the difference between the molecules of soaps and detergents, chemically? Explain the cleansing action of soaps. [3]

Answer: Difference between molecules of soaps and detergents

Soaps
Detergents
(i) Soaps are the sodium or potassium salts of long chain carboxylic acids. The ionic group in soaps is COO–Na+
(i) Detergents are the sodium salts of long chain benzene sulphonic acids or long chain alkyl sulphates. The ionic group in a detergent is:
—SO3–Na+ or —SO4–Na+
(ii) Soaps are biodegradable.
(ii) Some detergents are not biodegradable.
(iii) Soaps have relatively weak cleansing action.
(iii) Detergents have a strong cleansing action.

Action of soap in removing an oily from a piece of cloth: Soaps are molecules in which the two ends have differing properties, one is hydrophilic, that is, it dissolves in water, while the other ends is hydrophobic, that is, dissolves in hydrocarbons. When soap is at the surface of water, the hydrophobic ‘tail’ of soap will not be soluble in water and the soap will align along the surface of water with the ionic end in water and the hydrocarbon ‘tail’ protruding out of water. Inside water, these molecules have a unique orientation that keeps the hydrocarbon portion out of the water. This is achieved by forming clusters of molecules in which the hydrophobic tails are in the interior of the cluster and the ionic ends are on the surface of the cluster. This formation is called a micelle. Soap in the form of a micelle is able to clean, since the oily dirt will be collected in the centre of the micelle. The micelles stay in solution as a colloid and will not come together to precipitate because of ion-ion repulsion. Thus, the dirt suspended in the micelles is also easily rinsed away. 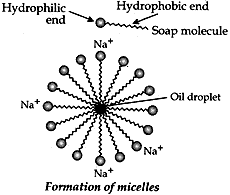 OR
How many groups and periods are there in the modern periodic table? How do the atomic size and metallic character of elements vary as we move:

Sol. There are 18 groups and 7 periods in the modern periodic table.

Question: 13. What is DNA copying? State its importance. [3]

Answer: A process in which a DNA molecule produces two similar copies of itself in a reproducing cell through chemical reaction is a called DNA copying.

When the object is between F and C (centre of curvature): The image formed is real, inverted and magnified. It is formed beyond C.

Question: 15. With the help of a labelled diagram, explain why the sun appears reddish at the sunrise and the sunset. [3]

Answer: At the time of sunrise and sunset when the sun is near the horizon, the sunlight has to travel the greatest distance through the atmosphere to reach us. During the long journey of sunlight, most of the shorter wavelength blue-colour present in it is scattered out and away from our line of sight so, the light reaching us directly from the rising sun or setting sun consists mainly of longer wavelength red colour due to which the sun appears red.

Due to the same reason, the sky surrounding the rising sun and setting sun also appears red. Thus, at sunrise and sunrise, the sun itself as well as the surrounding sky appear red.

Question: 18. (a) Draw magnetic field lines of a bar magnet. “Two magnetic field lines never intersect each other.” Why?
(b) An electric oven of 1.5 kW is operated in a domestic circuit (220 V) that has a current rating of A. What result do you expect in this case? Explain. [5]

Now the current drawn by the oven is 6.8 A which is very high but the fuse in this circuit is only 5 A capacity. When a very current of 6.8 A flowers through 5 A fuse, the fuse wire get heated too much, melt and break the circuit, cutting off the power supply.

Answer: The property of a conductor due to which tends to stop the flow of current through the conductor is called resistance.

SI unit is ohm. When a potential difference of IV across a wire gives rise to IA current through the wire, then the resistance is said to be length, thickness, nature of material and temperature of conductor.
(i) If length is doubled, then R is doubles because the resistance of a conductor is directly proportional to length.
(ii) Resistance of a conductor is inversely proportional to the square of its diameter or area of cross-section.

Therefore, it radius is doubles, the resistance becomes 1/4.

Question: 19. Explain why carbon forms compounds mainly by covalent bond. Explain in brief two main reasons for carbon forming a large number of compounds. Why does carbon form strong bonds with most other elements? [5]

Answer: The atomic number of carbon is 6 which mans that a neutral atom of carbon retains 6 electrons. So, the electrons configuration of carbon is K, L.
2, 4.

Science, carbon has 4 electrons in its outermost shell so, it should either lose or gain 4 electrons to achieve the inert gas configuration and become stable.

(i) It could gain four electrons forming C4- anion. But it would difficult for the nucleus with six protons to hold on ten electrons due inter electronic repulsion.

(ii) It could lose 4 electrons forming  C4+ cation. But it would require a large amount of energy to remove four electron from its outermost shell.

The reason for the formation of strong bonds by the carbon atoms is their small atomic size. Due to the small size carbon their nuclei hold the shared pairs of electrons between atoms strongly, leading to the formation of strong covalent bonds. The carbon atoms also form strong covalent bonds with the atoms of other elements such as hydrogen, oxygen, nitrogen, sulphur, chlorine and other elements.

Flow chart showing determination of sex of a child:

Therefore it is the sperm from the father which determines the sex of the child.

Question: 21. “A convex lens can form a magnified erect as well as magnified inverted image of an object placed in front of it.” Draw ray diagram to justify this statement stating the position of the object with respect to the lens each case.
An object of height 4 cm is placed at a distance of  20 cm from a concave lens of focal length 10 cm. Use lens formula to determine the position of the image formed. [5]

Answer: (i) A convex lens can form a magnified erect image when the object is placed between the optical centre and principal focus of the convex lens (i.e., between O and F’).

(ii) A convex lens can form a magnified inverted image when the object is placed between focus and the centre of curvature (i.e., between F’ and 2F’).

According to the lens formula,

So, image is formed at 6.66 cm from lens on same side. Image is erect, virtual and diminished in size.

Question: 22. An iron nail is dipped in the solution sulphate for about minutes, state the change in colour in colour observed. Give the reason for the change. [2]

Answer: His experiment is correct since some of the current is utilised to overcome the resistance of the wires of the circuit and instruments like ammeter and voltmeter. Thus the experimental values of resistance were different from the value of resistance.

Question: 25. List two observations which you make when you add a pinch of sodium hydrogen carbonate to acetic acid in a test tube. Write the chemical equation for the reaction that occurs.

Answer: When a pinch of sodium hydrogen carbonate is to acetic in a test tube, there are two observations:
(i) Brisk effervescence
(ii) Evolution of a colourless and odourless gas which is CO2.
CH3COOH (aq) + NaHCO3(s) → CH3COONa (aq) + H2O (l) + CO2(g)↑

Question: 26. Name the type of asexual reproduction in which two individuals are formed from a single parents and the parental identity is lost.
Draw the initial and the final stages of this type of reproduction. State the event with which this reproduction starts.

Question: To find the image-distance for varying object-distances in case of a convex lens, a student obtains on a screen a sharp image of a bright object placed very far from the lens. After that he gradually moves the object towards the lens and each time focuses its image on the screen. [2](1). In which direction-towards or away from the lens, does he move the screen to focus the object?
(2). What happens to the size of image – does it increase or decrease?
(3). What happens when he moves the object very close to the lens?