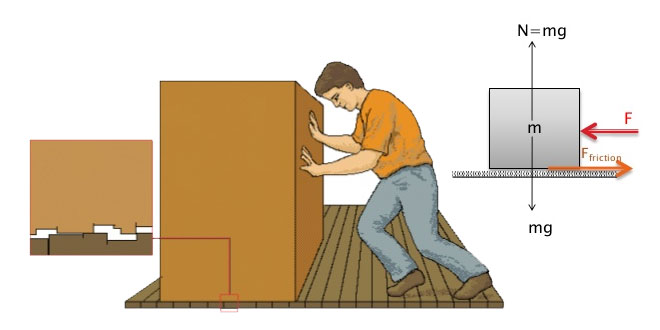 Question: What is friction?

Answer: Friction is a force that slows down moving objects or prevents stationary objects from moving.

Question: On what principle do ball bearings work?

Answer: Ball bearing works on the principle of rolling friction. Ball bearing contains steel balls or rollers. It is used between the wheels and axle of a car to reduce friction.

Question: How does lubrication reduce friction?

Question: Give an example to show the effect of heat generated in a machine due to excessive friction.

Answer: Friction generates heat- sometimes it can be harmful. The heat produced in a fast moving machine is very high. Proper arrangements have to be made to cool the machines, otherwise it can get damaged. If the cooling arrangement in a car does not work properly, the engine can get jammed.

Question: What is the effect of friction on motion?

Answer: Effect of friction on motion:

Question: What causes friction between two surfaces in contact?

Answer: The contact with a rough surface with grooves and ridges cause the moving object to stop as when one surface moves over another, these grooves and ridges get caught up with each other and slow down the motion causing friction.