Question: Cricket is originally a / an

Question: “There is a historical reason behind both these oddities.” In the preceding two paragraphs, find two words / phrases that mean the same as ‘oddities’.

Question: How is a cricket bat different from a hockey stick?

Answer: A cricket bat is thick and flat while a hockey stick is bent at the bottom.

Question: Write True or False against each of the following sentences.

The Story of Cricket – Question: “the men for whom the world is a stage”.

3. It implies that cricketers are like actors and every cricket ground is like a stage on which the drama of cricket is enacted the world over.

Question: Name some stick-and-ball games that you have witnessed or heard of.

Question: The Parsis were the first Indian community to take to cricket. Why?

Answer: Parsis were in the close contact with the British because of their interest in trade. They were the first Indian community to westernise and went up taking up the game of cricket.

Question: The rivalry between the Parsis and the Bombay Gymkhana had a happy ending for the former. What does ‘a happy ending’ refer to?

Answer: ‘Happy ending’ refers to the defeat of the Bombay Gymkhana by the Parsi club in a cricket match held in 1889.

Question: Do you think cricket owes its present popularity to television? Justify your answer.

Answer: Yes, cricket owes its popularity to television. It has expanded the audience of the game by taking cricket to villages and small town.
Children from these places now had the chance to learn the game seeing the international games and imitating their favourite cricketers.

Question: Why has cricket a large viewership in India, not in China or Russia?

Answer: Cricket is not played in communist countries like China and Russia so it has less viewership there. India is one of the oldest cricket playing nation which further adds to its large viewership in the country.

Question: What do you understand by the game’s (cricket) ‘equipment’?

Answer: The accessories like bat, ball, stumps and bells are the equipment used in playing the game. Pads, helmets and gloves are protective equipment used while playing cricket.

Question: How is Test cricket a unique game in many ways?

Answer: Test cricket is unique because it can go on for five days and still can end with a draw. No other game requires even half of this time to finish. A football match is played for 90 minutes.

Even nine innings of a baseball match gets over less than what it takes to finish a one-day match.

Question: How is cricket different from other team games?

The Story of Cricket – Answer: Cricket is different from other team games because in cricket, the length of the pitch is mentioned as 22 yards however, the shape of the ground could be oval or circular. There is no specific measurement for the size of the ground as well.

It is the only game played for five days and can end without a specific result. Unlike cricket, many other popular games like hockey or football follows certain specification for grounds

Question: How have advances in technology affected the game of cricket?

Answer: Advancement in technology has been used in manufacturing protective equipment in cricket. The newly invented vulcanised rubber was used in pads and gloves. The helmets are made up of metal and lightweight synthetic materials.

Clues to the hidden words are given below.

Answer: Horizontal six deliveries, four runs, attacked while out of arena, no result, stumps, fielder to the off-side of the wicket keeper.
Vertical stumps flying, back to the pavilion, a lofty one, mid-air mishap, not even one out of six, goes with bat. 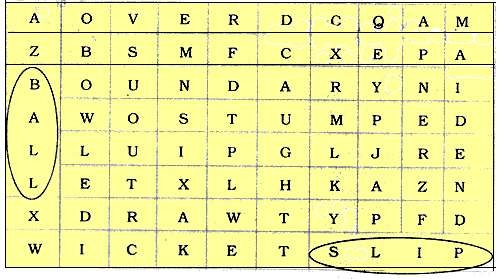 Question: Add -ly to the italicised word in each sentence. Rewrite the sentence using the new word. See the examples first.

Question: Use the following phrases appropriately in place of the italicised words in the sentences given below.

Question: Complete each of the following words using gh, ff or f. Then say each word clearly after your teacher.

Question: Write two paragraphs describing a bus ride to watch a cricket match in a village. Use the following points. Add some of your own.

Answer: A cricket match was organised in Muzaffarnagar last week. I went to watch the match along with my friend. I live in Modinagar and Muzaffarnagar is two hours bus journey from my place. We caught a bus of Uttar Pradesh transportation from the bus depot near my place. It was an old and crowded bus. We didn’t get any seat and had to keep standing all through the journey. The passengers were mostly farmers from the nearby villages.

They were very simple and friendly. We were chatting with each other and cracking jokes. It was a long journey and the roads were very bad.

When we finally reached Muzaffarnagar, I felt relaxed. There was a large fair being organised at the place where the match was to be played. There was still time left for the match to begin so we decided to enjoy the fare. There were many stalls of food items and games at the fare and we had great fun.

The match started on its time. It was between two village teams. We were cheering for our team. There was a tough competition between both the teams and finally our village won the game.

The match was very exciting and enjoyable, but the long journey had made us tired. It was a very good day that left behind many sweet memories.

Question: Name one cricket ground that is oval in shape.

Question: Mention the year when the cricket rules were written for the first time

Answer: Cricket rules were written for the first time in 1744.

Question: State two changes that were seen in the game of cricket around 1780.

Answer: By 1780, a Test match was played for average three days. It was also the period when the first six-seam cricket ball was created.

Question: The game of cricket traces its origin from where?

Answer: The game of cricket traces its origin from rural England.

Question: Where and by which community cricket was initially played in India?

Answer: Cricket was initially played in Bombay by the Parsi community.

Question: What are the changes the cricket bat has undergone with time?

Answer: Initially the cricket bat was similar to the shape of hockey bat because the ball was bowled underarm. The bowlers then began to pitch the ball through the air rather than rolling it on ground. The curved bats were then replaced by the straight ones. Initially the bat was made by a single piece of wood. These days it consists of two pieces. The blade is made of willow wood while the handle is of cane.

Question: CK Nayudu name is recorded in the history of cricket. What are. the reasons that make him a legend?

Answer: CK Nayudu is revered because he was an outstanding batsman. He was one of the few initial Indian cricketers who got to play the test match cricket. Nayudu created history by becoming the first captain of the Indian Test team.

Question: During the 1760 and 1770s, it became common to pitch the ball through the air. What changes it brought in to the game of cricket?

Answer: Following the above mentioned trend, one immediate change was the replacement of the curved bats by the straight ones. The bowlers got the options of length, deception through air and increased pace because of this. It opened new possibilities for spin and swing bowling. In response to tricks applied by the bowlers, the batsmen had to improve their timings and shot selection.

Answer: India has the largest viewership for the game of cricket among all the test playing nations. It is also the largest market in the cricketing world. It has made the centre of gravity to shift towards South Asia from the country it originated.

The ICC headquarters too were shifted from London to Dubai where it is tax-free. The Indian cricket players are the best paid in the international cricket. They are famous and have got millions of supporters.

Directions: 1 (Q. Nos. 1-6) Read the extract given below and answer the following questions.

Cricket does not. Ground can be oval like the Adelaide Oval or nearby circular like Chepauk in Chennai. A six at the Melbourne Cricket ground need to clear much more ground than it does at Feroze Shah Kotla in Delhi.

Question: What does the sentence ‘Cricket does not’ refers to?

Answer: It refers that there is no specification in cricket for the size and the shape of the ground.

Question: Explain the phrase ‘nearby circular’.

Answer: It means that the Chepauk stadium in Chennai is not completely, but almost like the shape of a circle.

Question: What are two shapes that a cricket ground can be of?

Answer: A cricket ground can be almost oval or circular.

Question: A six at the Melbourne Cricket ground need to clear much more ground than it does at Feroz Shah Kotla in Delhi. This means that:

Question: ‘A six’ in the above lines mean

Question: What is Chepauk?

Directions 2: (Q. Nos. 1-6) Read the extract given below and answer the following questions.

If you look at the game’s equipment, you can see how cricket both changed with changing times and yet fundamentally remained true to its origin in rural England. Cricket’s most important tools are all made up of natural, pre-industrial materials.

Question: Mention one protective equipment used in the game of cricket.

Question: Write one important tool used in the game of cricket.

The Story of Cricket – Answer: Bat

Question: Name the materials through which the cricket’s important tools made up of.

Answer: Cricket’s most important tools are made up of natural and pre-industrial materials.

Question: What has its origin in rural England?

The Story of Cricket – Question: Find one word from the above lines that means ‘from beginning’

Previous A Bicycle in Good Repair: 7th Class CBSE English Ch 09
Next Board Exams not to be conducted till February next year