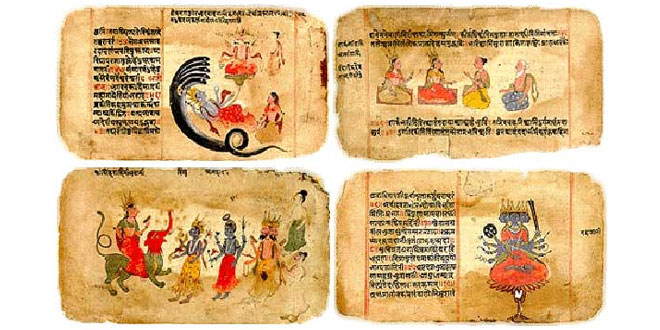 Answer: The four Vedas are:

Question: In what language has the Rigveda been composed?

Answer: The Rigveda is in Vedic Sanskrit.

Question: What were the various purposes of fighting battles as depicted by the Rigveda?

Answer: Battles were fought for cattle, land, water and for capturing people.

Question: What were the groups of people in terms of their work?

Answer: There were two groups of people in terms of their work—the ‘brahmins’ and the ‘rajas’.

Question: Who were the ‘Aryas’ and the ‘Dasas’?

Answer: People who composed the hymns called themselves Aryans and they called their opponents ‘Dasas’.

Question: What were megaliths? [Imp.]

Question: Name some area where megaliths were prevalent.

Answer: Megaliths were prevalent in the Deccan, South India, in the North-east and Kashmir.

Question: How is it known that burial spots were meant for families?

Answer: Sometimes megaliths contain more than one skeleton. This indicates that families were buried together.

Question: Where is Inamgaon situated?

Answer: Inamgaon is a site on the river Ghod, a tributary of the river Bhima.