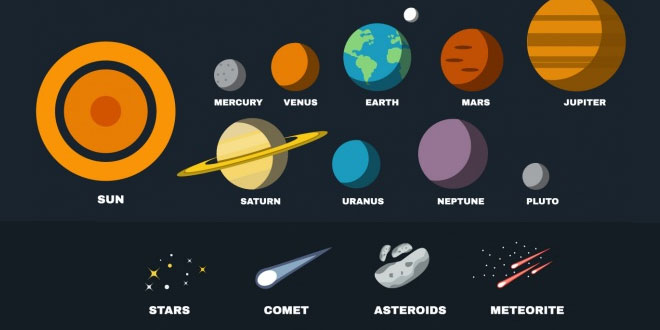 Answer: The universe is the boundless expanse in which all matter, stars, planets, satellites etc exist. The most accepted Theory related to the birth of the universe is called Big Bang theory.

From this matter, many groups of stars were formed which we call galaxies. Our sun belongs to a galaxy called Milky Way (Akash Ganga in Hindi). The nearest galaxy to the Milky Way is Andromeda, which is 2 million light years away.

Question: What do you understand by ‘Solar System’.

Answer: The word ‘sol’ means the sun and ‘system’ refers to its family. The solar system is the name given to the sun and the group of heavenly bodies that revolve around it – the eight planets and their satellites or moons, meteors, comets and asteroids.

Question: What according to you makes the planet Earth unique?

Answer: The earth is a unique planet in the solar system because of the following reasons –

Question: What is an Asteroid?

Answer: Pieces of rocks found orbiting the sun in a belt between Mars and Jupiter. These small rocky bodies are called asteroids. Most of these chunks of rock vary in size. Ceres is the largest asteroid which has a diameter of approximately 700 km.

Previous English Essay on Value of Sports for Students and Children
Next NCERT 6th Class (CBSE) Social Science: The Earth in the Solar System – Quiz