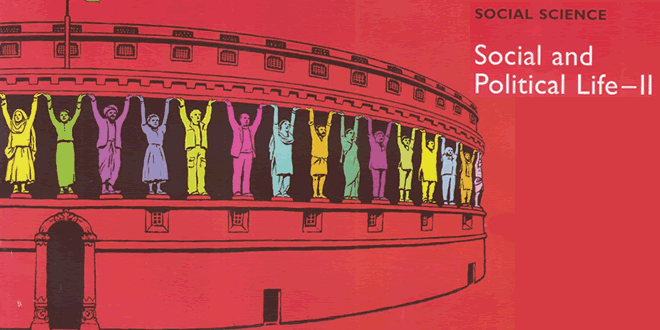 Women Change the World – Answer: Women are considered inferior to men. There is a belief that women do not have technical mind and therefore they cannot be scientists. It is thought that women are good at only certain jobs such as teaching and nursing. These stereotypes about women’s capability or incapability of doing certain jobs badly affect women’s right to equality. It is due to this reason that women are not paid less wages than their male-counterparts.

Question: List one reason why learning the alphabet was so important to women like Rashsundari Devi, Ramabai and Rokeya.

Answer: Learning the alphabet was so important to these woman because only after that they became able to write stories, letters and autobiographies which described their own experiences of inequality.

Question: “Poor girls drop out of school because they are not interested in getting an education”. Re-read the last paragraph on page 62 and explain why this statement is not true.

Question: Can you describe two methods of struggle that the women’s movement used to raise issues? If you had to organize a struggle against stereotypes, about what women can or cannot do, what method would you employ from the ones that you have read about? Why would you choose this particular method?

Women Change the World – Answer: The women’s movement used several methods of struggle in order to raise issues. Two out of them are:

Question: What is the percentage of women engaged in agricultural work in our country?

Answer: 83.6% of women are engaged in agricultural work.

Women Change the World – Question: What does agricultural work mean to these women?

Answer: It is because major portion of the agricultural work is done by man. Women only assist them.

Question: Why was Ramabai given the title ‘Pandita’?

Answer: It was because she could read and write Sanskrit. It was a remarkable achievement as women were not allowed such knowledge those days.

Question: How did women support men in the pottery trade?

Answer: They collected the mud and prepared the earth for the pots.

Question: Mention any one stereotype about what women can or cannot do?

Answer: Women can be good teachers but they are incapable of dealing with technical things.

Question: How did Laxmi Lakra break the stereotype that only men could be engine drivers?

Question: What changes came to be seen with the emergence of new ideas about education and learning in the 19th century?

Answer: Schools became more common and communities that had never learnt reading and writing started sending their children to school.

Question: Who was Rashsundari Devi? What did she write in her autobiography?

Answer: Rashsundari Devi was a housewife from a rich landlord’s family in west Bengal. She wrote about her everyday life experiences in her autobiography.

Question: What did Rokeya Sakhawat Hossain do for the girls?

Answer: She started a school for girls in Kolkata which is functioning even today.

Question: Mention any two reasons why many girls do not continue their education.

Answer: Poverty and discrimination are the two major reasons why many girls do not continue their education.

Question: What is the purpose of conducting census every 10 years?

Answer: Census is held every 10 years to count the whole population of the country. It also gathers detailed information about the people living in India – their age, schooling, what work they do and so on.

Question: What is meant by the Women’s Movement?

Answer: Women as a whole struggled for long to bring out all round improvement in women’s condition. This is known as the Women’s Movement.

Women Change the World – Question: What happened to Satyarani’s daughter?

Answer: Her daughter was murdered for Dowry.

Question: What are the various means to spread awareness among the common mass?

Answer: International Women’s Day is celebrated on 8 March every year.

Question: What do women do on International Women’s Day?

Answer: Women all over the world come together to celebrate the auspicious Day and renew their struggles.

Question: Give a brief life sketch of Laxmi Lakra.

Answer: Laxmi Lakra belongs to a poor tribal family in Jharkhand – She studied in a government school. She studied hard and did well and then went on to get a diploma in electronics. She then took the railway board exam and passed it on her first attempt. She became the first woman engine driver for Northern Railways. In this way she broke stereotype that engine drivers could be men only. She says “I have challenges and the moment somebody says it is not for girls. I make sure I go ahead and do it”. Laxmi has had to do this several times in her life—when she wanted to take electronics, when she rode motorcycles at the polytechnics and when she decided to become an engine driver.

Question: Who set up a Mission in Khedgaon near Pune in 1898? How did the Mission prove beneficial for the women?

Answer: Pandita Ramabai setup a Mission in Khedgaon near Pune in 1898. This was the place where widows and poor women were encouraged not only to become literate but to be independent. They were taught a variety of skills from carpentry to running a printing press, skills that are considered male preserve. This Mission is still active today and does a lot for women’s upliftement.

Question: Was Rashsundari Devi a superstitious woman? If not, why not?

Answer: Rashsundari Devi was a housewife from a rich landlord’s family in West Bengal. She was not allowed to learn to read and write. During her time, some 200 years ago, there was a prevalent belief that if a woman learnt to read and write, she would bring bad luck to her husband. Rashsundari Devi took this belief as false because she was not at all superstitious. She took strict decision and taught herself how to read and write in secret, well after her marriage. She even wrote her autobiography in Bangla at the age of 60. Her book titled Amor Jiban is the first known autobiography written by an Indian woman.

Question: Although the literacy rates have increased since independence, what remains the worrying factor with respect to gender?

Answer: It is true that the literacy rates have increased since independence. According to the 1961 census, about 40% of all boys and men were literate compared to 15% of all girls and women. In the census of 2001, these figures have grown to 76% for boys and men and 54% for girls and women. This means that the proportion of both men and women who are able to read and have at least some amount of schooling has increased. But the worrying factor is that the percentage of male is still higher than the female group. The gap exists even today.

Question: Why was Rokeya Sakhawat Hossain stopped from learning Bangla and English? How did she manage to team these languages?

Answer: In those days, English was seen as a language that would expose girls to new ideas, which people thought were not correct for them. Therefore, it was mostly boys who were taught English. However, Rokeya Sakhawat Hossain wished to learn these two languages in addition to Urdu. Fortunately, she got the support of her elder brother and an elder sister and ultimately learnt to read and write Bangla and English.

Question: Who wrote the story Sultana’s Dream? What is the story all about?

Answer: It was Rokeya Sakhawat Hossain who wrote the story Sultana’s Dream in 1905 at the age of 25. The story is all about Sultana’s dream. In her imagination she reaches a place called Ladyland. Ladyland is the place where women had the freedom to study, work and create inventions like controlling rain from the clouds and flying air cars. In this Ladyland, the men had no freedom at all.

They had been sent to seclusion. Their aggressive guns and other weapons of war defeated by the brain-power of women. As Sultana travels in the Ladyland, She awakes suddenly and becomes disappointed to see the reality.

Question: What are the various ways women apply to fight discrimination and seek justice?

Answer: The various ways women apply to fight discrimination and seek justice are as follow: