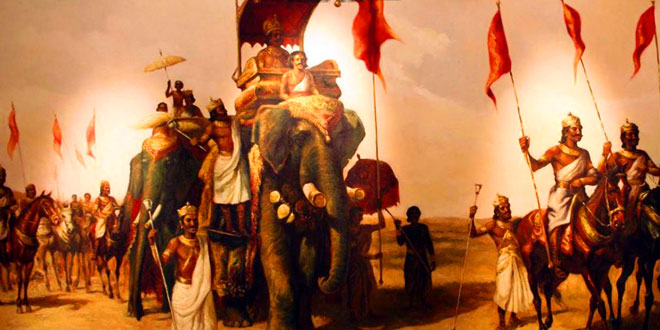 Question: What were the different roles of different persons in the sacrifice?

Answer: The ‘raja’ was the central person in the sacrifice. He was given a special seat, like a throne. His charioteer would tell others tales of the ‘rajas’ exploits. His wives and sons would perform several minor rituals. Other ‘rajas’ would sit and watch. Priests sprinkled sacred water on the king. Ordinary people brought gifts.

Question: What is known about the ‘janapadas’ and their people?

Answer: Archaeologists have excavated a number of settlements in ‘janapadas’. They have found that people lived in huts. The people kept cattle as well as other animals. They grew a variety of crops like rice, wheat, barley, pulses, etc. They made earthen pots, some of which were grey in colour and some red.

Question: Write a short note on the governance system in ‘ganas’ or ‘sanghas’?

Answer: In ‘ganas’ or ‘sanghas’, these were not one but many rulers. Even if there were several men together, each was called a ‘raja’. They performed rituals together. They met in assemblies and took decisions. Women, ‘dasas’ and ‘kammakaras’ were not allowed to participate in these assemblies.

Answer: Capital cities of ‘mahajanapadas’ were mostly fortified by building huge walls of wood, brick or stone around them. There were various reasons for building forts. They were probably built because people were afraid of attacks from other kings and needed protection. Some rulers probably built forts to make their cities impressive and to show how rich and powerful they were. Moreover, by making forts, controlling the fortified area became easier for the kings.

Buildings forts required a great-deal of planning. Hundreds of thousands of brick or stone had to be prepared. Enormous amount of labour and resources were required.

Question: What changes took place in agriculture around this time?

Answer: There were two significant changes in agriculture around this time:

Question: Bimbisara laid the foundations of a strong empire in Magadh. Do you agree with this statement? Give reasons.

Answer: Yes, we agree with the statement that Bimbisara laid the foundations of strong empire in Magadh as: