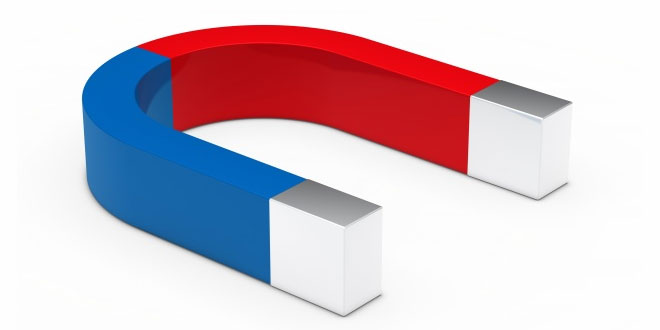 Magnet: An object which attracts magnetic materials; like iron, cobalt and nickel; is called magnet.

Discovery of Magnet: Magnet was discovered by an ancient Greek shepherd; named Magnes. Once; while he was fiddling with his stick, the metallic end of the stick got stuck with the rocks. Those rocks contained the natural magnet, magnetite. The story of magnetite spread far and wide. Some people believe that magnetite was discovered at a place called Magnesia.

Artificial Magnet: Magnet which is made by humans is called artificial magnet.

Magnets are made in different shapes and they are named according to the shape, e.g. bar magnet, dumb-bell shaped magnet, horse-shoe magnet, cylindrical magnet etc.

Magnetic Materials: Materials which are attracted towards a magnet are called magnetic materials, e.g. iron, nickel and cobalt.

Non-magnetic Materials: Materials which are not attracted towards a magnet are called non-magnetic materials, e.g. aluminium, zinc, wood, rubber etc.

Poles of a Magnet:

Interaction Between Poles of Magnet

Magnetic compass is composed of a small box with a glass top. The magnetic needle is placed on a pivot around which it can rotate freely.