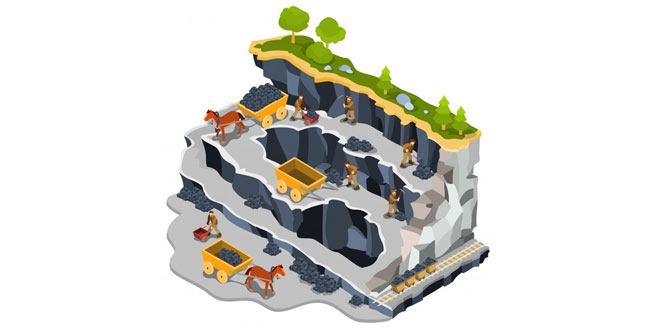 Question: Describe the distribution of iron ore in India.

Answer: Iron-ore is the backbone of modern cultivation. It is used for manufacturing machines and tools. India has about 20% of the world reserves of iron ore. Most of the iron-ore mined in the country came from Chhattisgarh, Jharkhand, Orissa, Goa and Karnataka. Some well known iron-ore mines are in Durg and Dantiwar – a district of Chhattisgarh, Singhbhum district of Jharkhand and Sundargarh, Keonjhar and Mayurbhanj district of Orissa, North Goa, Chikmagalaur and Bellary district of Karnataka.

Question: Describe the distribution of coal in India.

Answer: In Jharkhand, the largest producer where Jharia, Bokaro, Karampur, Palamu are the major coal fields.
In West Bengal, Raniganj, Jalpaiguri and Darjeeling are the coal fields.
In Chhattisgarh, Sarguja, Bilaspur, Raigarh and Bastar districts are coal fields.
Madhya Pradesh has coal fields in Chhindwara district.
In Maharashtra – Chanda is the main coalfield.

Question: Why do you think that solar energy has a bright future in India?

Answer: It is true that solar energy has bright future in India because