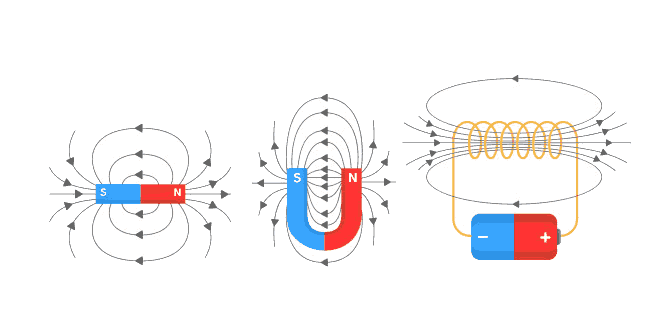 Question: In our daily life we use two types of electric current whose current-time graphs are given below:

(1). Name the type of current in two cases.
(2). Identify any one source for each type of current.
(3). What is the frequency of current in case (b) in our country?
(4). On the basis of these graphs list two differences between the two currents.
(5). Out of the which one is used in transmitting electric power over long distances and why?

Question: (a) Describe an experiment with a diagram to show that force is exerted on a current carrying conductor when placed perpendicular in a magnetic field.
(b) How will this force change if current in the conductor is increased?
(c) Name a device that uses the above principle.

Answer: (a) Consider the rod shown in the figure which is placed in a magnetic field. When current is passed through the rod, it gets deflected. This shows that a current carrying conductor in a magnetic field experiences a force. 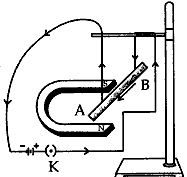 Question: (a) Which effect of the electric current is utilised in the working of an electrical fuse?
(b) A fuse is connected in series or in parallel in household circuit?
(c) Draw a schematic labelled diagram of a domestic circuit which has a provision of a main fuse, meter, one light bulb and a switch and a switch socket.

Answer: (a) Heating effect.
(b) Series.
(c) The diagram is as shown below:

Question: (1). Draw a schematic diagram showing common domestic circuit.
(2). State the function of an earth wire. Why is it necessary to earth metallic appliances such as an electric iron?

Question: (a) Define electromagnetic induction.
(b) Two coils P and S are would over the same iron core. Coil P is connected to battery and key and the coil S is connected to galvanometer. Draw a suitable diagram of this arrangement and write your observations when:
(i) Current in the coil P is started by closing the key.
(ii) Current continues to flow in coil P.
(iii) Current in coil P is stopped by removing the key.
Explain the reason for such observations.

Answer: (a) It is defined as the phenomenon by which a changing magnetic field in a conductor induces a current in another conductor.

Question: Two coils C1 and C2 are wrapped around a non-conducting cylinder. Coil C1 is connected to a battery and key and C2 with galvanometer G. On pressing the key (k), current starts flowing in the coil C1. State your observation in the galvanometer.

(i) When key K is pressed on.
(ii) When current the coil C1 is switched off.
(iii) When the current is passed continuously through coil C1.
(iv) Name and state the phenomenon responsible for the above observation. Write the name of the rule that is used to determine the direction of a current produced in the phenomena.

Fleming’s right hand rule is used to find the direction of current.

Question: (i) The given figure shows a domestic electric circuit Study this circuit carefully. List any two errors in the circuit and justify your answer.
(ii) Give one different between the wires used in the element of an electric heater and in a fuse.
(iii) List two advantage of parallel connection over series connection.

Question: Why does a compass needle gets deflected when brought near a bar magnet?

Answer: A compass needle is, in fact, a small bar magnet. If this is brought near another bar magnet, the like poles repel and the needle gets deflected.

Question: List the properties of magnetic lines of force.

Answer:
a) Magnetic lines are directed from the north pole towards the south pole.
b) They do not cross each other.
c) They are more crowded near the poles than at any other region in the field.
d) They are closed curves.
e) In the uniform magnetic field, the lines of force are parallel to one another.

Question: Why don’t two magnetic lines of force intersect each other?

Answer: No two field-lines are found to cross each other. If they did, it would mean that at the point of intersection, the compass needle would point towards two directions, which is not possible.

Question: Consider a circular loop of wire lying in the plane of the table. Let the current pass through the loop clockwise. Apply the right-hand rule to find out the magnetic field inside and outside the loop.

Answer: At every point of a current –carrying loop, the concentric circles representing the magnetic field around it would become larger and larger as we move away from the wire. By the time we reach at the center of the circular loop, the arc of these big circles would appear as straight lines.

Question: The magnetic field in a given region is uniform. Draw a diagram to represent it. 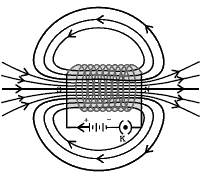 Question: What is the principle of an electric motor?

Question: What is the role of the split ring in an electric motor?

Question: Explain different ways to induce current in a coil.

Question: State the principle of an electric generator.

Answer: The sources which produce alternating current is a permanent magnet called the field magnet, armature, slip ring and carbon brushes. After every half rotation the polarity of the current in the respective arms changes. Such a current, Which changes direction after equal intervals of time, is called an alternating current.