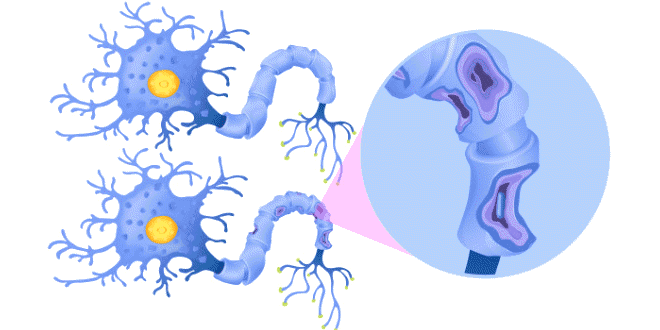 Question: What is the function of receptors in our body?

Question: Draw the structure of neuron and explain its function. 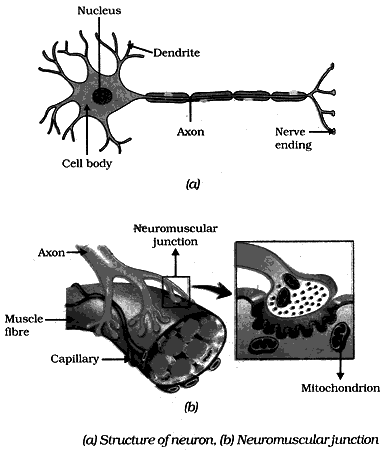 This information, acquired at the end of the dendritic tip of a nerve cell, sets off a chemical reaction that creates an electrical impulse. This impulse travels from the dendrite to the cell body, and then along the axon to its end.

At the end of the axon, the electrical impulse sets off the release of some chemicals. These chemicals cross the gap, or synapse, and start a similar electrical impulse in a dendrite of the next neuron. This is a general scheme of how nervous impulses travel in the body.

A similar synapse finally allows delivery of such impulses from neurons to other cells, such as muscles cells or gland. It is thus no surprise that nervous tissue is made up of an organized network of nerve cells or neurons, and is specialized for conducting information via electrical impulses from one part of the body to another.

Question: How does chemical coordination occur in plants?

Answer: It has been found that the growth of plants is regulated by certain chemical substances which are synthesized by the plants in very small amounts. These are known as plant hormones or phytohormones.

They are the organic substances which either promote or inhibit growth. A phytohormones can be defined as a chemical substances which are produced naturally in plants and are capable of translocation and regulating one or more physiological processes when present in low concentration. Main categories of plant hormones are:

Question: What is the need for a system of control and coordination in an organism?

Answer: Co-ordination in this sense refers to the regulation or control of body activity.

Plants need very little in the way of a control system. Since growth and reproduction are about the only things that are regulated, a rapid control system is not required and hormonal control is all they possess.

Animals are continually moving through new environments that may pose all types of changes and threatening situations to the organism. This requires the rapid and precise control of a nervous system. Hormones regulate slower activities, such as growth, development and reproduction.

Question: How are involuntary actions and reflex actions different from each other?

Reflex actions are done to meet emergencies where as an inaction may or may not be for just meeting an emergency but may be a critical lie process as circulation of blood, swallowing of food, movement of food in food pipe etc.

Question: Compare and contrast nervous and hormonal mechanism for control and coordination in animals.

Answer: In human beings, the nervous system controls the various functions by small units called neurons. Neurons receive the information through sensory nerves and transfer them through motor nerves.

Whereas, hormones coordinate the activities and growth of the body. Important functions like sugar level metabolism, growth and development etc. are controlled by hormones secreted by endocrine glands.

Question: What is the difference between the manner in which movement takes place in a sensitive plant and movement in our legs?

Answer: Movement in a sensitive plant (i) It occurs in response to an external stimulus like touch and shock. (ii) Plant cells change shape by changing the amount of water. (iii) No nerves are involved. (iv) There is no specialized tissue in plants for conduction of information. (v) Plant cells do not have specialized proteins.

Movement in our legs (i) It occurs in response to our requirements and is a voluntary action. (ii) Movement in our legs is voluntary action which is controlled by cerebellum part of hind brain. (iii) Nerves carry the message for movement of legs. (iv) There is specialized nervous tissue in animals for conduction of information and muscle cells to help in movement. (v) Animal cells have specialized protein which help muscles to contract or relax.

Question: What is the function of receptors in our body? Think of situations where receptors do not work properly. What problems are likely to arise?

Answer: The receptors in our body collect information about changes in the environment around us in the form of stimuli. They are located in our sense organs such as the inner ear, nose, tongue, eye, etc. These then pass the information in the form of nerve impulses to central nervous system (spinal cord and brain) where message is interpreted and instructions are sent to effectors which reveal responses. When receptors do not work properly, the environmental stimuli are not able to create nerve impulses and body does not respond.

Question: Draw the structure of a neuron and explain its function.

Answer: Functions: The information acquired at the end of the dendritic tip of a neuron sets off a chemical reaction which creates an electrical impulse. This impulse travels from the dendrite to the cell body, and then along the on to its end. At the end of on, the electrical impulse sets off the release of some chemicals, which cross the synapse and start a similar impulse in a dendrite of the next neuron.

In this way nervous impulses travel in the body. Thus, nervous tissue is made up of an organised network of neurons which are specialized for conducting information via electrical impulse from one part of the body to another.

Question: How does phototropism occur in plants?