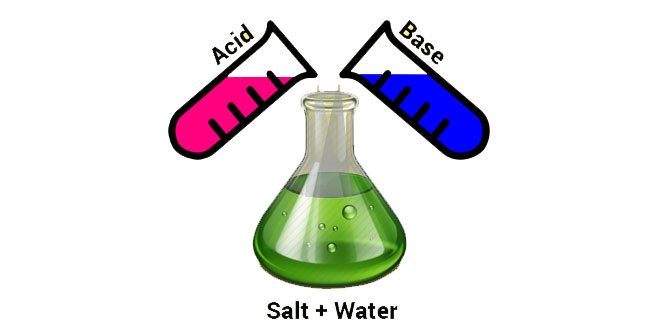 Question: You have been provided with three test tubes. One of them contains distilled water and the other two contain an acidic solution and a basic solution respectively. If you are given only red litmus paper, how will you identify the contents of each test tube?

Answer: The contents of each test tube would be identified by change in colour of red litmus paper. For example, when we wet the red litmus paper with the basic solution, it changes into blue colour. Put the changed blue litmus paper in the solution which turns the blue to red will be the acidic solution. The solution, which has no effect on any litmus paper, will be neutral and hence it will be distilled water.

Question: Why should curd and sour substances not be kept in brass and copper vessels?

Answer: Curd and other sour foodstuffs contain acids, which can react with the metal of the vessel to form poisonous metal compounds which can cause food poisoning and damage our health.

Question: Which gas is usually liberated when an acid reacts with a metal? Illustrate with an example. How will you test for the presence of this gas?

Answer: When a metal reacts with an acid, usually hydrogen gas is liberated.
Reason: Metals loose electrons easily and thus can reduce hydrogen ions (H+) of an acid to hydrogen gas.
e.g., when zinc reacts with dilute sulphuric acid, it produces hydrogen gas.

Test: The hydrogen gas evolved can be tested by passing the gas through soap solution and then bringing a burning candle near a gas filled bubble.

Result: The soap bubble bursts and the hydrogen gas burns with a pop sound.

Question: Metal compound A reacts with dilute hydrochloric acid to produce effervescence. The gas evolved extinguishes a burning candle. Write a balanced chemical equation for the reaction if one of the compounds formed is calcium chloride.

Question: Why does an aqueous solution of acid conduct electricity?

Answer: The aqueous solution of an acid conducts electricity due to the presence of charged particles called ions in it.

Question: Why does dry HCl gas not change the colour of the dry litmus paper?

Question: While diluting an acid, why is it recommended that the acid should be added to water and not water to the acid?

The heat is evolved gradually when a concentrated acid is added to water for diluting an acid and the large amount of water is easily absorbed.

If, however, water is added to concentrated acid to dilute it, a large amount of heat is evolved at once. The heat generated may cause the mixture to splash the acid on our face or clothes and cause acid burns.

Question: How is the concentration of hydronium ions (H3O+) affected when a solution of an acid is diluted?

Answer: When the concentrated solution of an acid is diluted by mixing water, the concentration of hydronium ions H3O+ per unit volume decreases.

Question: How is the concentration of hydroxide ions (OH-) affected when excess base is dissolved in water?

Answer: When the solution of a base is diluted by mixing more water in it, the concentration of hydroxide ions (OH– ions) per unit volume decreases.

Question: You have two solutions A and B. The pH of solution A is 6 and pH of solution B is 8.
i. Which solution has more hydrogen ion concentration?
ii. Which of this is acidic and which one is basic?

Question: What effect does the concentration of H+(aq) ions have on the nature of the solution?