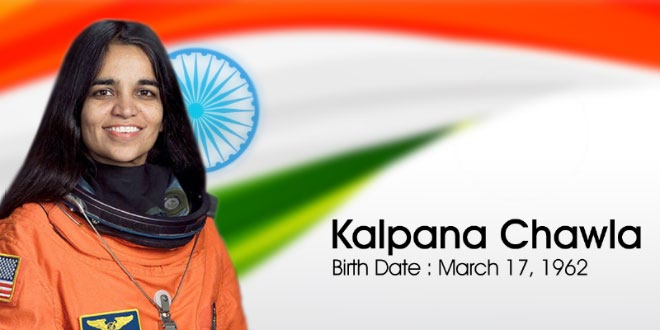 Kalpna Chawla was born 42 year ago in 1961, in the Karnal district of Haryana state, India. She got her primary education in Tagore Bal Niketan School. She was intelligent right from her childhood. She went to space again on 16th January, 2003 with her seven companions.

In 1993, she became the Vice-chairperson of overset Pathatenk of California. In 1994, she was accepted as a space passenger by Nasa. In 1995, she became a member of space zone. Before going to space, Kalpana told that going again in space was like a fulfillment of her dream. Dreaming of going to space, Kalpana also wanted to land at moon. In these ten years, Kalpana was true to her responsibilities. According to her teacher, Kalpana had keen interest in science right from the beginning. So, she dreamt to going to space from childhood. Due to her interest in science. her father inspired her to go for higher studies.

But unfortunately, when Kalpana after doing research in space was returning to earth, the space shuttle Colombia burst at a height of 2 lacs feet. This was a heart breaking news for especially the staff of NASA, her school companions and teacher. This news spread like a wild fire in the world. No one was abic to believe it. The whole world was in grief. Though Kalpana had left this world, but she had inspired thousands of women in the world to go space for the benefit of human beings.