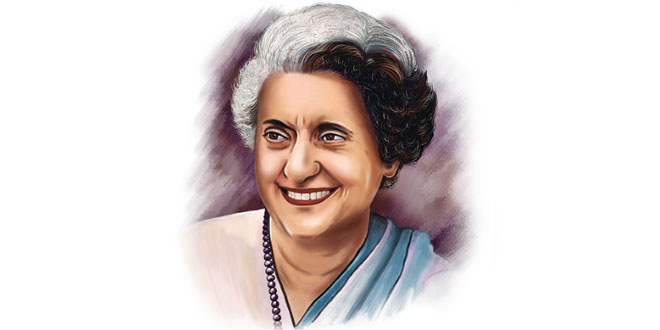 Indira Gandhi English Essay: Priyadarshini Indira Gandhi was born in Allahabad on 19th November, 1917. She was the daughter of Pandit Jawaharlal Nehru, the first Prime Minister of free India. As a child Indira Gandhi admired Gandhi Ji very much.

She did her studies at Shanti niketan, founded by Shri Rabindranath Tagore. She also studied at England and Switzerland. She married Feroze Gandhi later. Indiraji was drawn to the freedom struggle from a very early age. She even went to Naini Jail for taking part in the Quit India Movement.

Indiraji received a lot of political education from her father and other Congress leaders. After Panditji’s death in 1964, Shri Lal Bahadur Shastri succeeded him as the Prime Minister. Indira Gandhi took over the information and Broadcasting ministry under him. In January 1966, Shastriji suddenly died.

Thus Indira Gandhi became India‘s Prime Minister, and held the post for four terms in all, except for three years between 1977 and 1980. She was a very strong and determined leader. No matter how busy she was, she always had ears for what the common people of India had to say. Indira progressed steadily under her.

Indira Gandhi was ruthlessly killed by her own body guards on October 31, 1984. A fearless leader for so many decades, she was brave even in death. The people of Indra still love and respect this great lady.

Indira Gandhi, a first woman prime minister of India, was born at 19th of November in the year 1917 in Allahabad. She was the daughter of the first Indian prime minister Pandit Jawaharlal Nehru. She got her higher education from the Vishwa Bharati University and Oxford. She was very interested to the political life from her childhood which came true one day.

She got married to the Feroze Gandhi in 1942 and got an opportunity to become Congress Working Committee member in the 1955. Indira Gandhi was a great political leader and thus selected as President in the year 1959. She also became a Cabinet member of the Lal Bahadur Shastri as the Minister for Information. After the sudden death of the Shastri Ji in 1966 at Taskant, Russia, she was selected as the Prime Minister of India.

She played a major role in strengthening the Indian democratic structure and tradition. She handled the war of 1971 against Pakistan and win. She did hard towards the Indian economy to get the declared objectives. She worked a lot for the democratic socialism and weaker sections. Signing of the Shimla Pact with Pakistani Premier Z.A. Bhutto, Indo-Soviet Treaty of Peace, Friendship and Cooperation was done under her leadership. Under her leadership the first nuclear tests at Pokhran took place. First Asian Games in the New Delhi, first Astronaut Squadron Leader, Rakesh Sharma had went to the Space and the growth of the Indian Space Research and Peaceful Nuclear development gone under her proficient guidance.

She was very much interested in the music, literature and fine arts. She was awarded with the great Indian award Bharat Ratna in 1971. She has proved to be a fascinating leader of the modern India who has left an impression on the world affairs and the Non-alignment Movement. She was died on 31st of October in 1984 by the bullets of assassin at her residence.