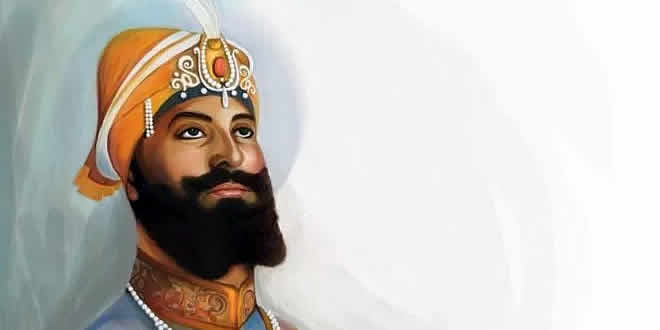 ‘Guru Gobind Singh’, the tenth Guru, was born at Patna Sahib in Bihar, India on December 22, 1666. He is the last of the Tenth Gurus of Sikhism. He was the son of Guru Tegh Bahadur, who gave his life to protect religious freedom.

Guru Gobind Singh Ji was nominated as the Guru by the ninth Guru of Sikhs, Guru Tegh Bahadur who was also his father. After Guru Tegh Bahadur’s death, Guru Gobind Singh became Guru on November 11, 1675. He lost his father, mother, and all four of his sons to a religious war, being waged by the Mughal emperor, Aurangzeb was keen to see Islamization of Hindus an Sikhs. Guru Gobind Singh established the ‘Khalsa’, a military force of saint-soldiers which he baptized. Guru Gobind Singh is highly regarded by the Sikhs his monumental role in the development of the Sikh faith. He was a learned man. He compiled a number of books and poetry collections in his life. Before his death in 1708, he declared the Guru Granth Sahib, which is Sikhism’s Holy Scripture to be the permanent Sikh Guru.

Guru Gobind Singh Jayanti is celebrated by the Sikhs as the birthday of their tenth and last guru Guru Gobind Singh. It is a religious celebration in which prayers for prosperity are offered. This day witnesses large processions and special prayer gatherings at all Gurudwaras.