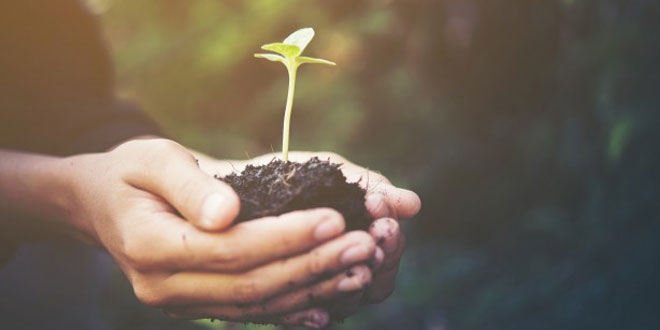 Answer: Definitions are as follows:

Environment – It refers to all external conditions in which an organism lives. It comes from the french word ‘environ’ which means to surround. It is used to describe everything, such as places, things, People, nature etc. It also includes thing created by human beings.
Lithosphere – The rocky outermost layer of the earth is called the lithosphere. The term lithosphere means. Rocky crust it includes the crust and upper part of the mantle. The average thickness of the lithosphere is about 100 km. It is made up of rocks and minerals. The uppermost part of the lithosphere forms a thin layer of soil.
Biosphere – The narrow zone where the lithosphere. Hydrosphere,and atmosphere meet and interact is called the biosphere. The word biosphere comes from the Greek word ‘BIOS’ meaning life and Latin word ‘sphere’ which means the total rang. The is sphere supports life and is this called the ‘living world’. The biosphere consists of the plant and animal kingdom.
Ecosystem – The complex system of interactions between the organisms and their physical environment in a particular area is referred to as an ecosystem the size of the ecosystem varies greatly. It can be as large as rain forests, grasslands, desserts, lakes, rivers or as small as a pond.
Pollution – The disturbances caused to the environment due to excessive exploitation of nature, unplanned and use of technology, overpopulation, and Industrialization is called pollution.
Urbanization – Number of People living in urban areas as compares to the total population of the country.

Question: Why did the Chipko movement take place?

Answer: In 1973 the villagers in the Alaknada river valley of Uttarakhand protested against the indiscriminate cutting down of trees. They did so by hugging the trees in order to save them from being cut down. This movement became famous as the Chipko movement.

Question: What are the reasons for environmental be managed properly?

Answer: The reasons for environmental pollution are unplanned and unwise use of technology.

Question: How can natural environment be managed properly?

Answer: A perfect balance is needed between the natural and human environment. A number of organization with the help of scientists, technologists and planners are working to solve the environmental problems facing the world.

Question: Explain the relationship between geography and environment?