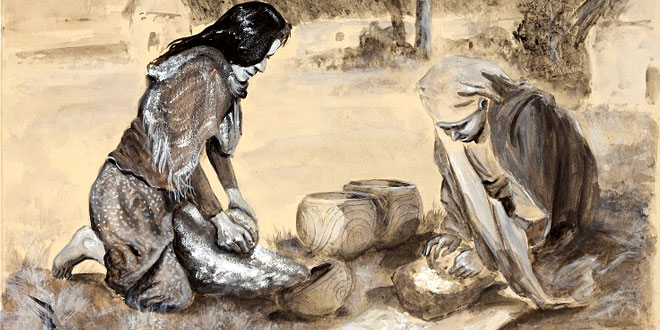 Question: Why do farmers grow some crops in some areas and not in other areas?

Answer: Farmers do this because different plants grow in different conditions.

Question: Which was the first animal to he tamed?

Answer: The first animal to be tamed was the wild ancestor of the dog.

Question: Mention the two purposes for which grains had to be stored.

Answer: Grains had to be stored for food and seed.

Question: What did people do to store grains?

Answer: People made large clay pots or wove baskets, or dug pits into the ground.

Question: Name some important sites where archaeologists have found evidence of farmers and herders.

Answer: These sites can be found in the north-west, in present-day Kashmir and in east and South India.

Question: How do scientists help in finding out whether the discovered sites were settlements of farmers and herders?

Answer: Scientists study evidence of plants and animal bones, in order to find out whether the discovered sites were settlements of farmers and herders.