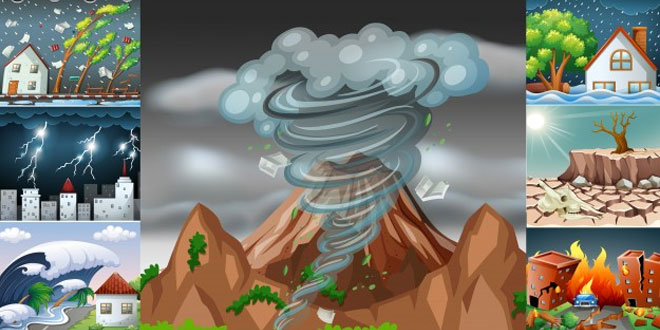 Question: What is a disaster?

Question: How does an earthquake occur?

Answer: Earthquakes are violent vibration or tremors on the surface of the earth. These tremors are both minor and major in intensity. Minor earthquakes happen everyday but we do not feel them. But major earthquakes are the most dangerous, widespread and destructive of all natural disasters. It is quite difficult to predict when an earthquake will occur.

Answer: Volcano is a vent or an opening in the earth’s crust through which hot molten magma from the interior (of the earth) comes out.

Question: What is a flash flood? What are the precautions necessary in case of floods?

Answer: Flash floods: is a sudden flooding of water in low lying areas due to heavy rain or cloud break. It is sudden and extremely dangerous.

Question: How do we prepare for natural disasters like tsunami?

Answer: Tsunami is a Japanese term comprised of two words, ‘tsu’ meaning ‘harbour’ and ‘namis’ which means ‘waves’. They are a serious of waves which occur due to underwater volcanic eruption or earthquake. This displaces a massive amount of water in the ocean. It can occur anytime during day or night and is hence dangerous for the fishing communities, inhabitants of low lying coastal areas, etc. Tsunamis can travel upstream as well.