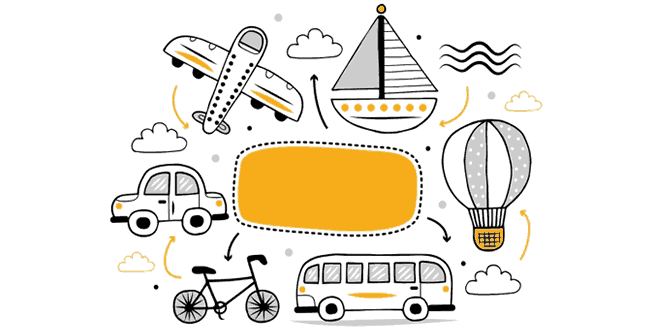 Transport plays an important role in the economy. Because of transport raw materials reach the factory and finished products reach to the consumer. The pace of development of a country depends upon the production of goods and services as well as their movement over space. Therefore, efficient means of transport are pre-requisites for fast development.

Apart from transport, the ease and mode of communications, like telephone and internet makes seamless flow of information possible.

Today, India is well-linked with the rest of the world despite its vast size, diversity and linguistic and socio-cultural plurality. Railways, airways, water ways, newspapers, radio, television, cinema and internet, etc. have been contributing to its socio-economic progress in many ways. The trades from local to international levels have added to the vitality of its economy. It has enriched our life and added substantially to growing amenities and facilities for the comforts of life.

India has one of the largest road networks in the world, aggregating to about 2.3 million km at present. In India, roadways have preceded railways. They still have an edge over railways in view of the ease with which they can be built and maintained. The growing importance of road transport vis-à-vis rail transport is rooted in the following reasons;

In India, roads are classified in the following six classes according to their capacity

Golden Quadrilateral: The government has launched a major road development project linking Delhi-Kolkata- Chennai-Mumbai and Delhi by six-lane Super Highways. The North-South corridors linking Srinagar (Jammu & Kashmir) and Kanyakumari (Tamil Nadu), and East-West Corridor connecting Silcher (Assam) and Porbander (Gujarat) are part of this project. The major objective of these Super Highways is to reduce the time and distance between the mega cities of India. These highway projects are being implemented by the National Highway Authority of India (NHAI).

State Highways: Roads linking a state capital with different district headquarters are known as State Highways. These roads are constructed and maintained by the State Public Works Department (PWD) in State and Union Territories.

Other Roads: Rural roads, which link rural areas and villages with towns, are classified under this category. These roads received special impetus under the Pradhan Mantri Grameen Sadak Yojana. Under this scheme special provisions are made so that every village in the country is linked to a major town in the country by an all season motorable road.

Border Roads: Apart from these, Border Roads Organisation a Government of India undertaking constructs and maintains roads in the bordering areas of the country. This organisation was established in 1960 for the development of the roads of strategic importance in the northern and northeastern border areas. These roads have improved accessibility in areas of difficult terrain and have helped in the economic development of these area.

The length of road per 100 sq. km of area is known as density of roads. Distribution of road is not uniform in the country. Density of all roads varies from only 10 km in Jammu & Kashmir to 375 km in Kerala with the national average of 75 km (1996-97). Road transportation in India faces a number of problems. Keeping in view the volume of traffic and passengers, the road network is inadequate. About half of the roads are unmetalled and this limits their usage during the rainy season. The National Highways are inadequate too. Moreover, the roadways are highly congested in cities and most of the bridges and culverts are old and narrow.